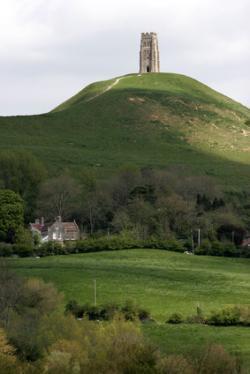 Somerset, in the south western corner of England, has long been associated with mystery and legend. The Isle of Avalon, which includes the Glastonbury Tor , is said by many to have been the home of King Arthur and the Knights of the Round Table. What is now a hill surrounded by levels was once an island, the levels having been progressively drained since Medieval times. Man has lived at Glastonbury since at 10,000BC and somewhere in the mists of time the Tor was modified and it may once have had a maze or Cretan spiral dug into its earthworks. This maze is said to signify the long and twisting path through life, with the tower at the top of the Tor representing the ultimate achievement of immortality. Walkers still trace the course of this maze today, considering it beneficial to their spiritual development. The tower that dominates the local landscape from its position on top of the Tor is the remains of St. Michael's church. The church was destroyed by an earthquake on 11 September 1275.

Glastonbury Tor has a sister hill, Challice Hill, which sits to the West of the Tor and is considered just as sacred as its more famous brother. Just at the boundary between the two hills youll find the sacred Chalice Well . St. Joseph of Arimathea is said to have buried the Holy Grail deep in the hillside at this spot to keep the chalice safe from thieves and robbers. Legend claims that a miraculous spring appeared afterwards. The water, which is red in colour, is said to run through the grail before reaching the surface and so is stained red with the blood of Christ. Visitors come from literally all over the world to drink the waters and many local residents collect their drinking water from the font. The red colour is actually a sign of Iron Oxide minerals leached into it from the Iron-rich Glastonbury soil. There is a beautiful and tranquil garden laid out beside the wellhead for visitors to enjoy. There is also a small shop there run by the Chalice Well Trust, the group which looks after the well.

On the other side of the Tor stand Gog and Magog, two ancient oak trees that stand on a ley line that links them directly with the top of Chalice Hill and on to the summit of nearby Wearyall Hill. The two oaks are thought to be survivors of an ancient druidic avenue. Wearyall Hill is the site of the holy Glastonbury Thorn , said to have sprung directly from the staff of Joseph of Arimathea when he planted it in the ground there having arrived in Glastonbury on pilgrimage. Challice Hill and Glastonbury Tor also both lie directly on the main east-west ley line that connects Glastonbury with sites such as Stonehenge . Ley line experts link this line with many other sites worldwide, including Mecca in Saudi Arabia and Mount Kilimanjaro. They believe Glastonbury is located in a particularly powerful place where a network of these ley lines converge. The Abbey at Glastonbury was also built along this east west line, which is known as the St Michael line.

Glastonbury is the undisputed spiritual centre of Somerset and it is considered to be one of the most mystic places in England. Despite this concentration on Glastonbury the many other mystic sites in Somerset do not escape attention. Cadbury Castle, which stands five miles north east of Yeovil , is another prominent hill and former fort. Like Glastonbury Tor this is also reputed to be the site of King Arthurs castle, Camelot. The ancient hill fort is near the village of South Camel and the river Camel passes nearby. Despite the similarities in the names, there is little other historical evidence to link the site to the legend of King Arthur. This shouldnt deter the visitor who will be rewarded with the site of a well-preserved multivallate hill fort with steep ramparts. A climb to the top which will be rewarded with wonderful views of the surrounding countryside on a clear day.

The Mendip Hills form the backdrop for the Somerset Levels and are a sparsely populated rural area. In ancient times the levels were flooded and so the Mendips were home to most of the people living in the region. High in the Mendips today you can still find evidence of these ancient populations. Barrows and burial mounds litter the hills. There are many sites such as the earthworks found at Priddy Circle, near the village of Priddy. These consist of a series of four stone circles, or Henge monuments and have now been listed as Scheduled Ancient Monuments. Each circle is around 160m in diameter and three of the circles are closely spaced in a nearly straight line. The fourth sits 350m to the north, out of line with the other three. They are thought to date from around the same Neolithic era as Stonehenge, around 2500 BC- 2180 BC. Priddy has other ancient monuments nearby, such as the two round barrow cemeteries at North Hill, the Ashen Hill barrows and the Priddy Nine-Barrows. This concentration of sites suggests that the area to the northeast of Priddy once held great ritual significance to the ancient inhabitants of Somerset.

Somerset is not only a place of numerous seemingly disparate monuments and sites, it also boasts a complete zodiac mapped out upon the land. In 1935 Katherine Maltwood claimed to have found the twelve signs of the zodiac represented in the land and features around Glastonbury. The sign of Aquarius is said to be represented as an eagle with spreading wings, Chalice Hill forms part of the birds body and the site of the old abbey its tail.

Visitors looking for mystic Somerset will find an abundance of places to seek out and experience. Accommodation is also plentiful in the area, thanks to Somersets long association with tourism. The George & Pilgrims Hotel in Glastonbury is the oldest purpose built inn within the Southwest. Founded in the early 15th century, the hotel has welcomed people for over 500 years. The Market House Inn in Magdelene St, Glastonbury may not be so ancient, but the family run inn next to the abbey ruins will make you feel just as welcome. Close to Chalice Well youll find Parsnips Bed and Breakfast , in Bere Lane, Glastonbury. Parsnips have very high expectations of quality and standards and their accommodation and breakfasts reflect this. Belle-Vue , also in Glastonbury, is a cosy 1920's B&B that boasts a Three Star Guest Accommodation Rating from the tourist board.