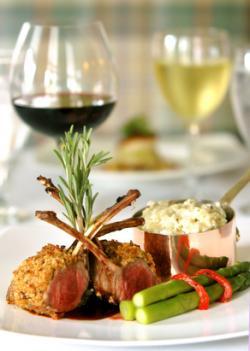 Many attractions bring visitors to Ludlow: its arts festival in the summer; the glorious castle and countryside; Ludlow Races ; the plethora of listed buildings; a basketful of excellent independent shops ; love for Housmans poetry . But one that adds to the pleasure of any visit, and has become reason enough to plan a break in the town, is the food there. Ludlow has been a gourmet destination for more than a decade.
If gourmet food equates to Michelin Guide as far as you are concerned, then Ludlow can offer several listed places including Overton Grange Hotel and The Clive Bar (which has rooms), plus starred restaurants La Bécasse on Corve Street and Mr Underhills at Dinham Weir behind the castle  learning that the latter recently won an award for which The Waterside at Bray was runner-up puts its offer into context.
But the towns love for food goes much deeper than that. Take its market (Monday, Wednesday, Friday and Saturday), not huge but one of the best in the land: by way of example, a cheese-stall where you may discover Montgomerys cheddar (surely the finest made?), local goats cheeses and tangy Double Gloucester . Or its food shops like the renowned Broad Bean on Broad Street where youll find wholefoods, quality coffees and more besides; and Corve Streets Myriad Organics for veg, meat, dairy and dry goods. And fittingly for a place surrounded by wonderful grazing land, there is no shortage of quality butchers shops selling locally raised meat  foodies swear by Ludlows sausages. Ludlow wears its foodie heart on its sleeve by hosting not one but two festivals catering for the taste-buds and the tummy: the main event is in September  beware of the possibility of delicacy overload as artisan purveyors tempt you with samples; and a smaller Spring festival in May celebrating the joys of beer, bangers and bread amongst other things, though those three have the makings of a pretty well balanced diet. Both make use of Ludlow Castle s grounds, so you can tell yourself you have gone for the culture too.
If you want to be able to stroll back to your accommodation after dinner Ludlow has plenty of central hotels: the Feathers Hotel is a magnificent Jacobean building which has its own restaurant, meaning you could avoid that stroll altogether; the imposing Georgian architecture of Dinham Hall is equally convenient for those who see walking as time spent not eating; the Charlton Arms is less than a quarter of a mile from the centre, but overlooking the river Teme its views belie that fact; likewise the Cliffe Hotel on the same side of the town. Or maybe the chance to experience a proper English inn  and proper English beer - attracts you? Then how about the Church Inn at the Buttercross, or the Wheatsheaf Inn which youll find by the ancient Broad Gate, one of Ludlows many architectural delights?
With a designated driver or a taxi the country surrounding Ludlow offers you rural tranquillity  not that Ludlow is exactly Piccadilly Circus  for relaxation after mastication: head for the hills to stay (and eat) at Fishmore Hall , for example.
For those whod prefer to focus their spending on the food, Bromley Court on Broad Street is at the top end of the B&B market. You can also rent a cottage via Welcome Cottages , or consult Information Britains list of other cottages available in the area. Or try combining the great food with the great outdoors and camp at Sparchford Farm , or Westbrook Farm Park .
If you must exercise Ludlow is one of those places where you will feel at ease just mooching about antiques emporia and browsing in the bookshops. A pre- or post-prandial walk around the town is worth the effort though: it has one of the loveliest churches in England; too many Tudor and Georgian buildings to mention here; and it feels right. There is no excuse for going thirsty in the town either: as an old coaching stop it has plenty of historic pubs like the Unicorn on Corve Street to tempt you inside for a quick restorative.
It would be hard for a visitor who has sorted out his or her accommodation, parked the car and dumped the case to be anything other than relaxed in Ludlow. Should you prefer to die thin and miserable, avoid the place and stick to cabbage water and muesli. Otherwise tuck in and smile. Personally, Id like to see the wine list please. And could you bring us some more of those delicious nibbles?