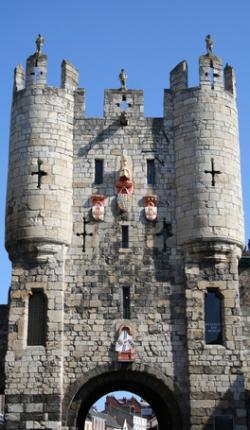 York has an amazing story to tell: the death of a Roman emperor; Viking invaders; the Industrial Revolution... Its museums cope well with the task. It used to be that museum meant relics in glass cases and Silence please, but most now have interactive stuff for the kids to touch and play with. History should be fun; our culture should be celebrated.
Nearly all of Yorks museums are centrally situated, or at worst a brisk walk away from the heart of the city, making a trip by train an option. The fingerposts make it easy to navigate on foot, and this is a city full of pubs, coffee shops and tea shoppes (!) for R&R on the way. If you come by car, the 'park and rides' are well worth considering  the compactness that makes York great for the pedestrian can mean slow progress and problem parking for the motorist. The best way to review Yorks museums is in rough chronological order. At St Saviours Church on St Saviourgate youll find a place kids will love: theres probably no better way to start digging into Yorks museums than at DIG . Costumed staff and the chance to take a trowel to excavation pits means its properly hands-on, taking you from Roman times through to the Victorians via the Viking and medieval eras.
For a more traditional approach leavened with creative touches the Yorkshire Museum (re-opening August 2010 after a refurb) between the station and Minster is a winner, with some fascinating artefacts  big on the Vikings too.
The NT Treasurers House in Minster Yard spooks it up in the cellars, something that always goes down well with my offspring, and has trails for children to follow  learning without realising it. Theres a walled garden as well to let you stretch your legs, and a tearoom to rest them.
For most kids though the big one is the Jorvik Viking Centre : more an experience than a museum, it fires the imagination telling the story of Yorks Viking past  complete with smells, sounds and surprises, showing what everyday life was like for the Norse who held the city so long.
York Castle was built by the Normans , and the Castle Prison Museum records some of the grimmer aspects of life in the city. Kids like gore and other peoples misery, so a good bet for them especially as they currently get in free if accompanied by a paying adult.
The medieval era in York is depicted in three museums: Merchant Adventurers Hall , a preserved guildhall but still in use; Micklegate Bar , a fortified gate in the city walls with 800 years or so of story to tell; and Barley Hall , a medieval house off Stonegate, which gives a more intimate view of the period  you can even sit on chairs and handle objects to truly give a feel of the times!
Georgian York is represented by Mansion House , built in 1725 and home to Yorks Mayors for centuries; and Fairfax House on Castlegate, a superb example of a Georgian townhouse.
Into the Industrial Age and Yorks place in our railway heritage is demonstrated in the vast collection at the National Railway Museum : theres stuff to see, stuff to ride on, buffet car tearoom, and symbols of our past engineering greatness like Mallard, a replica of the Rocket, and an ever changing display locos and rolling-stock  and its free!
If you are historied out, consider finally two quirkier places: the Quilt Museum and Gallery in St Anthonys Hall, another medieval guildhall; and York St Marys , a deconsecrated church now a contemporary arts venue.
Information Britain has more than 150 places to stay in York, but if youre doing history you may want to consider hotels with a touch of the historical about them. Railway enthusiasts in York could be attracted by the Sidings Hotel and Restaurant , which makes creative use of Pullman-style carriages. The Victorian architecture of the Royal York Hotel will recommend it to lovers of that epoch. Taking you further back architecturally is the fascinating Lady Anne Middletons Hotel on Skeldergate, with accommodation in five buildings there and an elegant courtyard. Or how about some country house luxury, still a stroll from the centre? Try Mount Royale Hotel on The Mount.
One of the grandest hotels in the area  as youd expect of a place once owned by the Rowntree family  is the Knavesmire Manor Hotel , a little out of the city. If youd prefer to combine city visit with country stay, Monk Fryston Hall Hotel between Pontefract and York might suit you; or 12 miles to the north of the city The Worsley Arms in Hovingham.
For those preferring self-catering Welcome Cottages have a selection of places in the area, and Information Britain lists various self-catering options.
York is not just museums: its a vibrant place with great shopping , theatres , fine restaurants and world famous racing , so if you can only face one or two museums you have plenty of options to fill a fun break.