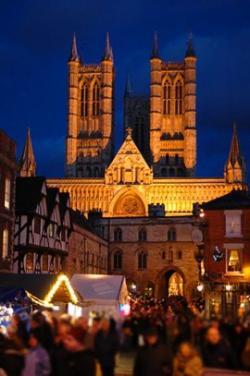 Christmas Markets had been popular in Germany for many years prior to Lincolns first Christmas Market of the new era, which opened with only 11 stalls. The market commenced in 1982 and was inspired by Lincolns twin town of Neustadt. Since those humble beginnings, the market has grown to over 300 stalls. The gothic cathedral and Norman castle provide the perfect backdrop to the biggest of the UKs Christmas Markets, set in the Medieval Square in the historic city of Lincoln . A huge variety of seasonal goods are on offer, as well as rides for the children to enjoy. Festive treats such as roasted chestnuts are available to warm you on the cold winter nights, and many stall holders dress in traditional Christmas apparel in order to increase the festive feel of the Market. Accommodation is plentiful in and around Lincoln; including the new Best Western Bentley Hotel , situated close to the junction of the A1 and A46 and only 10 minutes from the centre where the market is held. Alternatively, there is the Holiday Inn , situated in the centre of Lincoln on the Brayford Waterfront.

Another Christmas Market with a medieval backdrop is the Dickens Christmas Market at Rochester. Set in the grounds of Rochester Castle , a Norman castle once besieged by King John in 1215; the market is part of the Dickens Festival which attracts over 80,000 visitors to Rochester in the first week of December alone! There are festively coloured lights shining on the castle walls and fairy lights in the trees, the smell of roasted chestnuts and glühwein in the air; put together with traders in traditional Dickensian costumes to create a magnificent atmosphere appropriate to the time of year. The Bridgewood Manor at Chatham provide an ideal place to stay whilst visiting the market and the other attractions that the Medway towns have to offer. It is a four star hotel with two AA rosettes; offering leisure and spa facilities, as well as an award-winning restaurant. As an alternative you could also consider the Ramada Encore Chatham , offering 90 modern bedrooms, each with ensuite and power showers.

Cheltenhams Christmas Market runs from late November and into early December and is also modelled on the German style of Christmas Market. As a result, shoppers can enjoy Bratwürst and glühwein whilst browsing various delights from paintings to hand crafted jewellery, and even unusual ornaments made from Welsh coal. French crepes and a variety of olives are also on offer as an alternative to Bratwurst!

Worcester is home to one of the largest themed Christmas Markets in the West Midlands, with over 130 stalls filling the streets of the historic heart of Worcester with festive sights, sounds and smells. Barrel organ music and a Victorian Carousel help to complete the period atmosphere as shoppers are taken back almost two centuries. In 2009, two new special areas were created; one was the local area, selling goods created within a 30 mile radius of the town; the other an international area, offering a variety of intercontinental delights, from French crepes to Indonesian Bird Callers. If you are looking for somewhere to stay whilst visiting the market at Worcester, the Pear Tree Inn and Country Hotel is a traditional family owned inn with an a la carte restaurant; alternatively there is the Hundred House Hotel situated on the A443 Worcester to Tenbury Wells road.

Birmingham celebrates each year with an authentic German Christmas market. The Birmingham Frankfurt market has become a hugely popular annual event and has over 180 stalls. A special atmosphere is created by the small village of picturesque wooden chalets that sell a wide range of crafts, toys and candles; together with the delights of traditional German seasonal foods. Birminghams Victoria Square is the setting for this event each year and the atmosphere is enhanced by the Christmas lights and traditional bandstand music every lunchtime and evening. Accommodation is plentiful as Birmingham is one of the largest cities in the United Kingdom; amongst those hotels on offer is the unusual Gothic Architecture of the Paragon Hotel , centrally located and close to many of Birminghams features. Alternatively, there is the Plough and Harrow Hotel , built in 1704 and full of history.

Oxford Castle provides another picturesque and historic backdrop for Oxfords Christmas Market . The market has approximately 70 stalls, selling mainly fair-trade and handmade goods. Also on offer are mulled wine, homemade gingerbread and seasonal local food. There are choirs and bands to help increase the festive atmosphere and a small Victorian Carousel for the children. Oxford is a beautiful place to visit, steeped in history; much of which is related to its University, one of the worlds most famous academic institutions. All types of accommodation are available in Oxford with a wide range of hotel types. For example, the Eurobar Café and Hotel offers budget accommodation in the city centre. If you prefer something more luxurious and a little more unusual you could spend the night in the Malmaison Oxford Hotel . This imposing building was converted from a Victorian prison into a stylish boutique hotel; offering luxurious cells with power shower and stereo to ensure that your stay is a little more comfortable than some of the rooms previous occupants.

Some years ago people from the UK had to travel to Germany for a Christmas market; clearly this is now no longer necessary. Christmas Markets are thriving all over the UK and the UK markets offer a tremendous variety of size and location to suit every taste.