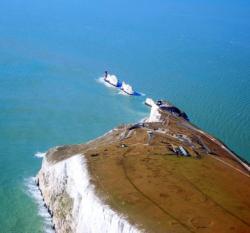 An island sea side stay

During the 1970s, air travel became sufficiently cheap for Britons to begin to choose a holiday abroad for their summer holiday. Prior to that, the number one choice for a holiday destination was undoubtedly a trip to the British seaside. This in itself was a relatively recent phenomenon, however, beginning early in the 19th century when the Prince Regent made seaside holidays fashionable. In the preceding centuries, coastal areas had been seen for their recreational properties, but only for the very rich. Most ordinary people would simply not have had the resources or means to even travel as far as the coast. The rise of the seaside resort as a destination for those other than the extremely wealthy began to happen during the Victorian era ; fuelled no doubt by a combination of the train and the growth of the middle class in Britain. It was Queen Victoria herself whose patronage of the Isle of Wight firmly established it as a leading destination for those seeking a seaside holiday. Initially, it would still have been mainly a pleasure for the wealthy, many of whom would purchase an additional residence on the island to use as a summer retreat.

In the modern era, many of the traditional British seaside resorts have sought to modernise their image. The Isle of Wight, however, still retains much of its Victorian charm. The Isle of Wight can be accessed from the UK mainland via boat, catamaran or hovercraft; from either Portsmouth or Southampton . Rail tickets can be purchased to destinations on the island, which include the crossing. The islands rail network is fairly extensive and uses former underground trains from London ; which no doubt makes many visitors from the capital feel right at home.

If you take the catamaran or the hovercraft across the Solent you will land on Ryde Pier or Ryde Esplanade respectively. Here you will be instantly in touch with the seaside holiday from a bygone age. Ryde Esplanade has all the features you would expect from a typical British seaside holiday; fish and chips, ice creams, traditional British pubs, a funfair and even souvenir shops. The beach at Ryde is situated to the north of the town centre and can be accessed by foot, car, bus, or even by the special novelty Dotto Train. The beach is kept clean and is manned constantly by lifeguards, to ensure a safe family experience. Whilst in Ryde, you can further enhance the Victorian splendour of your experience by staying the in the Ryde Castle Hotel . The Ryde Castle is a magnificent Victorian building complete with ramparts and turrets. It is conveniently situated on the Esplanade and offers easy accessibility; together with magnificent views across the Solent.

A little way around the coast is the popular resort of Sandown Bay. This picturesque bay captivated the Victorian visitors and within a few decades the bay saw massive investment and property development in the area. Today, Sandown retains the magic that so enthralled the Victorians and also offers many other attractions; such as the Tiger Sanctuary , the Dinosaur Isle museum and a modern health and leisure centre. Sandown offers a wide variety of accommodation, ranging from self catering chalets to luxury hotels. The Lawns hotel offers a family run hotel which has recently been awarded Highly Commended, Four Yellow Stars by the AA and is within walking distance of the railway station at Sandown. The Melville Hall Hotel has recently upgraded its leisure facilities and offers super king size and four poster beds in a number of rooms, some of which also feature jacuzzis.

Another Victorian favourite was the resort of Shanklin , just a little further around the coast from Sandown. Shanklin features many hotels built along the cliff tops during the Victorian era. There is a lift to take you down to the magnificent beaches of Shanklin, which have a favourable south easterly aspect for maximising the sunshine. All the features of the traditional seaside resort are present and Shanklin remains very much an unspoilt example of the classic British seaside village. Winding streets and beautiful thatched cottages, English tea rooms and other features of the classic English village compliment the fish and chips, amusements and pitch and putt. There are several classic English pubs in the Old Village and plenty of places to eat. Accommodation is plentiful, again covering the full range of types. The area was much loved by Keats , and visitors can enjoy Keats Green; a clifftop walk offering panoramic views across the English Channel, which inspired the opening line for Keats poem Endymion; A thing of beauty is a joy forever. Close by is the Victoria Lodge Hotel , offering ensuite accommodation and catering for vegetarians. Alternatively, there is the Harrow Lodge Hotel , a small, family run hotel which offers guests use of the facilities of the adjacent Leisure Centre.

Close to Shanklin is the resort of Ventnor , another picturesque seaside village with a small but attractive beach. Just a few miles from Ventnor is Blackgang Chine ; home to the Blackgang Chine amusement park since 1843. The park is still going strong today and is continually being upgraded with new attractions.

Sand is a key ingredient of the seaside holiday and the Isle of Wight offers something very special here. Alum Bay features an astounding mixture of different coloured sands, caused by oxidising iron compounds. These coloured sands have delighted visitors ever since the Victorian days, who started the practice of collecting many different colours in display vials, and creating pictures from the different coloured sands. Visitors are no longer allowed to dig out their own samples due to the danger of landslides, but it is still possible to buy souvenirs. The Needles Park has a facility for visitors to fill their own souvenir containers. The Needles are another geological wonder at the bay. These rock pinnacles stick out from the water at the south western tip of the island.