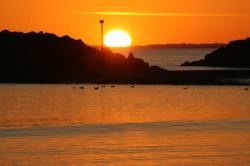 The central of the south coast of England is prime sailing territory. This region of the English Channel providing a good balance between enough shelter to make sailing feasible, together with enough challenging currents so that it is not too easy! The Solent , which separates the Isle of Wight from the mainland, is a particularly popular sailing area, which provides a sheltered environment for yachts and other boats. Such is the suitability and popularity of The Solent as a sailing area, that it has been described as probably the most famous leisure boating area in the world.

Right at the centre of this area is the City of Portsmouth and neighbouring Hayling Island . These two areas have strong links with the world of sailing, with many marinas and harbours available for the yacht and dinghy sailor. Hayling Island Sailing Club , first created in 1921 by seven sailing enthusiasts, is a very well respected club. In 2003 the club received a big boost when it was able to build a new clubhouse, backed by National Lottery funding. In 1936 the club moved to its current home at Sandy Point; on the tip of the narrow peninsula at the south eastern end of the island, which offers excellent access to Chichester Harbour and the Solent.

The Hayling Island Sailing Club is involved with the organisation of World and National Championships, Olympic Trials and national events. These include the 29er and 49er UK National and International Open Championships in August, which are open to all 29er and 49er class dinghies, and the Laser 2000 National Championship, held in July. It also runs a wide range of training programmes in everything from sailing and powerboating, to radio operation and first aid.

There are a number of marinas available to boaters around the Portsmouth and Hayling Island area. On Hayling Island is Sparkes Marina, which is close to the Hayling Island Sailing Club on the Sandy Point peninsula. In Portsmouth youll find Southsea Marina, situated on the south eastern coastal edge of the City.

There are, of course, numerous other sailing clubs in the area. Langstone Sailing Club , based in Langstone Road just north of the Hayling Bridge, offers its members the chance to compete in races as well as having a clubhouse and bar. The club also offers mooring facilities for members boats. Eastney Cruising Association was established in 1958 and was originally exclusively dedicated to Motor Cruisers. It has since opened its doors to many different types of mariners from sailors to fishermen. Locks Sailing Club is another racing club and is based in Langstone Harbour. The club prides itself on its vibrant atmosphere and reputation for youth training. Tudor Sailing Club is also based in Langstone Harbour. The club was formed in 1949 and claims to offer some of the best sailing facilities available in the harbour. Across Langstone Harbour on Hayling Island is the Hayling Ferry Sailing Club ; offering catamarans and monohulls the chance to sail without hindrance from the tide.

For a unique sailing experience, you can enjoy an outing on a Tall Ship . Tall Ships are available for hire for corporate events or parties at the Gunwharf Quays Marina. They accommodate between 20 and 140 guests for an unforgettable experience.

Finding somewhere to stay whilst sailing around this area is easy, as both Portsmouth and Hayling Island are long established seaside resorts and offer a wide range of accommodation options from camping sites to luxury hotels . If you are looking for a hotel on Hayling Island, a popular choice is the four star Langstone Hotel , which offers style and comfort with a choice of 45 Luxury bedrooms or 103 Executive bedrooms. All are air conditioned with ensuite bathroom plus tea and coffee making facilities.

Portsmouth offers the full spectrum of hotel classes from basic bed and breakfast to executive luxury. Hotels in and around the city include the budget Ibis hotel, situated right in the heart of the city, close to the main station and shopping precinct. The Ibis offers comfortable rooms without breaking the bank. Similar accommodation can be found at the Holiday Inn Express , which is close to Portsmouth Harbour train station and the Naval Dockyard. Maritime enthusiasts will no doubt want to visit the Naval Dockyard to see the two famous ships housed there; H.M.S. Warrior and H.M.S. Victory, Admiral Nelson s famous flagship. On the edge of the city is the Marriott Hotel , close to the junction of the M275 and M27 motorways, which offers high standards of accommodation and easy access to Portsmouth and other parts of the central southern coast.

If you prefer a hotel with a sea view, Portsmouth has no shortage of these! Probably the best known of these is the Queens Hotel , which overlooks Southsea Common and the seafront beyond. The Queens Hotel was among the first purpose built hotels in Southsea when it first opened in the 19th century and is a commanding and impressive building. The original building was designed by Victorian architect Augustus Livesey and built in 1861. Unfortunately, the building was largely destroyed by fire and rebuilt to its current grandiose design in 1903 by architect T.W. Cutler.

This section of the south coast is very convenient for anyone coming from London , with access via the A3 or M3/M27. Those coming from the Midlands can use the M40/M25 and M3, but may be advised to use the A34 and M27, which generally has less congestion and is more direct. Portsmouth has several train stations and is well served with trains from London, Brighton and the West Country. It also has ferry connections to France and Spain. Access to Gatwick and Heathrow Airport is also good from the Portsmouth area, plus air travellers could also use nearby Eastleigh Airport, which offers national and international flight services. Eastleigh airport is easily accessible from Portsmouth via the M27 motorway and also has a direct train service to Portsmouth from the adjacent Southampton Parkway station.