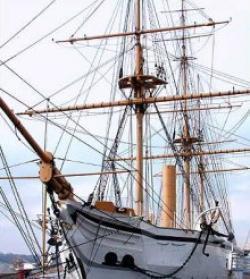 The Chatham Historic Dockyard occupies 80 acres of the former 400 acre site and claims to be the most complete dockyard preserved from the days of sail. There are seven main attractions there including the three historic warships the HMS Gannet, HMS Cavalier and the HMS Ocelot. HMS Gannet was launched on 31 August 1878 and was restored in 1987 to how she looked in 1888, which was the only time she saw actual naval combat. Ownership was transferred to the Chatham Historic Dockyard Trust in 1994 and is now listed as part of the National Historic Fleet, Core Collection. The HMS Cavalier is a former C-class destroyer, originally launched in 1943. After seeing active service and a brief career as a museum ship at other locations, HMS Cavalier was finally purchased by the Chatham Historic Dockyard in 1998. Visitors can explore the ship and youth groups can now stay aboard the destroyer to experience life onboard a Royal Naval Destroyer. HMS Ocelot is a submarine, launched on 5 May 1962 and powered by diesel/electric motors. She has been moored at Chatham Historic Dockyard as a museum attraction since 1992. The Ropery is a Georgian and Victorian rope factory, a popular attraction at the dockyard where you can even make your own piece of rope. The Wooden Walls is a reconstruction of working life at the dockyard in 1758 which centres around the construction of the HMS Valiant. The Museum of the Royal Dockyard has several model ships on display that date from as far back as the Spanish Armada to shortly after the Falklands War . The Lifeboat museum is another of the Chatham Historic Dockyards popular attractions. The famous HMS Victory, Admiral Nelson s flagship, was built at Chatham dockyard but now lays in the Portsmouth Historic Dockyard .

The Ship & Trades is an ideal place to stay when visiting the Chatham Historic Dockyard. A stylish pub with accommodation, it overlooks the yacht basin and has 11 en-suite rooms. Outside seating allows extensive views over the River Medway and a lift provides easy access to all rooms for wheelchair users. Those seeking the comforts of a branded chain would do well to check in at the Ramada Encore Chatham . This 90-room hotel is just 800 metres from the Chatham Historic Dockyard and is close to local shops and cinemas.

The River Medway was once of great importance to shipping, both commercial and military. Nowadays it is still in regular use but its pleasure craft that now dominate the river. A number of boat hire operators offer their services upon the Medway. You can hire and cruise your own motor boat or, if you prefer someone else to do the navigating, a number of pleasure cruises are on offer. Lovers of steam power might like a ride upon the Allington Belle which is a Mississippi styled paddle boat. Holding up to 50 persons its not quite on the same scale as the grand old river queens of the Deep South but it does still boast a great deal of character. The Allington Belle cruises between Allington and East Farleigh locks on the Upper River Medway and can be hired for parties and corporate events.

For those seeking something a little older a visit to Rochester , which is part of the Medway conurbation, is in order. The town of Rochester has had a castle since before the Norman times when a motte and bailey castle was established there in 1088 in place of an old Roman fort. At 113 feet (34.4metres) the keep is the tallest of any castle in England. However, the keep is partially ruined and has no interior. A walkway has been constructed to allow visitors to walk up to the top but this is not recommended for anyone who doesnt like heights! The castle is still surrounded by a moat but this is without water. It is said that Charles Dickens had requested to be buried there but he was instead interned at Westminster Abbey . Rochester also has a cathedral built in 1080 by Gundulph (or Gundulf), Bishop of Rochester. The Norman cathedral replaced a small Saxon cathedral that had stood on the site since Saint Ethelbert, King of Kent, established it in 604. Although by no means one of the largest cathedrals in Britain it is nonetheless an impressive building inside and out. The graveyard there is mentioned in several of Charles Dickens novels . Rochester is also home to the impressive Victorian High Street where everyday banks and shops run shoulders with olde worlde shops for the tourists. The Guildhall Museum and the Dickens Centre are both on the High Street and each warrants a visit.

When the kids, or even the adults, have had enough of history theres Diggerland Kent to entertain them. As its name suggests Diggerland is a themed fun park with diggers and dumper trucks at its core. Kids can enjoy a variety of activities there, including driving a dumper truck. If you need something a bit more active than driving a dumper truck then the Chatham Ski and Snowboard Centre is an ideal place to head to. Set in the Kent countryside, and surrounded by Capstone Country Park , the centre features a long artificial slope that is ideal for skiing and snowboarding. There is also the 750 metre long Cresta Run toboggan ride there and the fun activity of sno-tubing on offer.

Situated on the riverfront, the Premier Inn Rochester is suitable for stops in Rochester with the castle and cathedral just two miles away. Another chain hotel, the Holiday Inn Rochester-Chatham enjoys easy to access from the M2 or M20. The hotel has many facilities including a gym and a swimming pool. Both hotels make an ideal base for visiting all the other attractions in the Medway towns area.