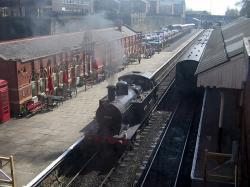 Lancashires core industries in the Industrial Revolution were coal mining and textiles. It was the perfect place for the cotton mills because of its unique climate. The county is constantly exposed to weather fronts moving in from the western seas with the mass of the Pennines catching the worst of the weather as it passes towards Yorkshire. This reliable annual rainfall keeps the air moist, perfect conditions for weaving the fragile strands of cotton. Not only that but it provided a dependable supply of water for reservoirs that supplied the mills and filled the canals which became the logistical backbone of the revolution.

The area known as the Weavers Triangle in Burnley is widely acknowledged as being one of the best preserved industrial districts in the North West. Bordered on one side by the Leeds and Liverpool Canal, the Triangle was at the centre of Burnley s textile industry and was home to warehouses, foundries, mills, weaving sheds and a Victorian school. Today many of these buildings survive and a visitor centre has been placed in the old Wharfmasters House and Toll Office to act as a focal point for visitors to the region.

Just up the road from Burnley is Harle Syke, home to the Queen Street Mill Textile Museum, which was the last commercial steam powered textile weaving mill in the world. Visitors to the museum can see live demonstrations of Victorian steam engines, boilers and looms.

The twin of the Queen Street Museum can be found by heading just south of Accrington (where the town centre is dominated by a giant railway viaduct) to the Helmshore Mill Textile Museum. Just like on Queen Street the museum features working machinery with live demonstrations and a programme of special events. The museums displays explore how wool and then cotton became Lancashires main export over the three centuries after the start of the industrial revolution.

If you would rather be out in the open than touring museums then Lancashire has two major industrial canals to explore; the Leeds and Liverpool Canal and the Lancaster Canal. Built in stages to improve commerce between east and west, the Leeds and Liverpool Canal is lined with industrial age buildings in almost all of the towns it passes through including Blackburn , Burnley, Wigan and Nelson . The same can be said of the Lancaster Canal which was built in respond to demand for transport between Manchester , Preston , Lancaster and Kendal and is perfect for first time narrowboat captains as it runs uninterrupted by locks or other major delays for 42 miles.