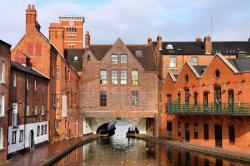 Touring the canals of the West Midlands is something that everyone can enjoy. By day you enjoy the peace and quiet of the countryside, maybe eating lunch at a canal side pub like The Manor Arms near Walsall , but still be only a 20 minute train journey away from Birmingham city centre for an evening out.

The Staffordshire & Worcester Canal (SWC) runs for 46 miles from Great Haywood to Stourport . Over that distance there are a total of 43 locks including Bratch Locks which is point of interest in its own right due to its distinctive configuration. The SWC is unique in that it is under the constant protection of the Staffordshire and Worcestershire Canal Society which has campaigned to make the waterway more accessible to beginners by introducing aqueduct nameplates and lock name boards. The canal is home to a fine selection of waterside eateries including the Cross Keys pub at Penk Ridge as well as the Goodnight Sweetheart tearooms and the Rising Sun further along at Stourport.

The Stratford-upon-Avon Canal runs for just 25 miles however in that distance it passes through the Forest of Arden and out across the watermeadows of the River Avon . Although it connects Stratford-upon-Avon and Birmingham the canal only passes through small villages as it wends through the countryside. There are several country pubs near moorings alongside the canal including the Boot Inn at Kingswood Junction between locks 14 and 15 as well as the Fleur-de-Lys pub at Lowsonford.

The Stourbridge Canal is only five miles long and provides an important route to the Birmingham Canal Navigations. The route passes through both scenic and suburban surroundings and passes artefacts from the areas glass making history past including the Red House glass blowing cone near Brierley Hill. For a closer look at this aspect of the past the Broadfield House Glass Museum is only a mile away from the canal in Kingswinford .

The Wryley & Essington Canal was originally built to transfer coal from the Cannock pit and is largely unused today. The route is mostly suburban but there are long rural sections which are popular with walkers and cyclists. Because it goes largely undisturbed the canals waters have a rich and varied ecosystem, providing a home for rare plants like water plantain, grass wrack pondweed, kingfishers, herons and occasionally otters.

The Birmingham & Fazeley Canal starts in Birmingham town centre but quickly heads out into the countryside for a 15 mile journey towards the Coventry Canal at Fazeley. One of the canals most impressive sites is the view of the bottom of spaghetti junction where there is a 150 year old canal junction. The towpaths of the Birmingham & Fazeley are dotted with places to eat including the Flapper & Firkin in Kingston Row and the extremely family friendly Broomey Croft Childrens Farm .

The Grand Union Canal is the longest single stretch of canal in the UK and accordingly there is plenty to do along its length. There are several pubs on the stretch between Birmingham and Radford Lock including the Cape of Good Hope which lends its name to the nearby locks and The Moorings bar and grill in Leamington Spa. The Grand Union canal is very popular in the summer so expect to be sharing the waterways with other boaters. If you would prefer a road less travelled then try the Birmingham Canal Navigations.

The Birmingham Canal Navigations are arguably one of the wonders of the industrial age. Nearly 150 metres above sea level the BCN still has 100 miles of navigable water and at its peak had gas lighting installed on the locks so that they could be in operation around the clock. The heart of the BCN is Gas Street Basin which is as much a part of the city as any other road with bars and cafes like All Bar One and restaurants like the Bank as well as shopping outlets.