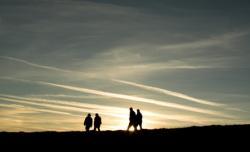 Walking in Norfolk? Doesnt walking happen further north and higher up, in Cumbria , the Pennines , and the Highlands ? The Weavers Way in Norfolk is proof positive that it is enjoyable to walk in flatter countryside (surely an attraction in itself). A lack of testing inclines also means the hikers you meet may be, like the route, more easy going. But as marsh takes the place of mountain and moor, do bring waterproof boots. Perhaps after Cornwall , Norfolk is the English county most readily associated with and best able to cater for holidays thanks to The Broads and seaside resorts like Hunstanton , Sheringham , Cromer and Great Yarmouth . Weavers Way links those last two towns, following paths used by cloth-makers and merchants in the distant days when East Anglia was Englands great textile area. The route passes near the village of Worstead that gave us that excellent and nearly eponymous cloth.
The winding path takes you as a traveller to places few holidaymakers ever see, much of it well away from cars, boats being more common sights at many points. That is certainly true of the leg from Great Yarmouth to Halvergate , which from near the resorts railway station edges along the north side of Breydon Water, the tidal estuary fed by the rivers Bure, Yare and Waveney. You pass an old drainage mill here, the first of many on the walk.
Dont forget to visit Yarmouth: even if the Golden Mile doesnt appeal (and the path officially ends or begins between Wellington Pier and Britannia Pier ) the Tollhouse Dungeons , the remaining medieval rows, and the revamped South Quay are well worth seeing. There is plenty of accommodation here detailed in Information Britain.
At the end of Breydon Water you will reach the Berney Arms - not something youd do by car - and the English Heritage-owned windmill beside it. There is a train halt here for those doing the route in easy stages. Across the water youll see the impressive Roman remains of Burgh Castle which deserve to be better known. Enjoy the big skies and the views here, with no hills in the way.
From Berney the path, generally well signposted but sometimes with diversions for repair that are not so well-marked, cuts across marshes dotted with more windmills, bringing you to Halvergate and the Red Lion village pub. The surprisingly large medieval church, its architecture typical of Norfolk, is easily seen from miles away.
Onwards and upwards through Tunstall to Acle , or rather around that little market town to the bridge north of it, the only river crossing between Yarmouth and Potter Heigham. Acle with two small supermarkets is the place to stock up on supplies (and dont miss Cumpsteys the butchers), have a restaurant meal, or sample the beer at the Bridge Inn .
After Acle Bridge the Weavers Way sticks to the north bank of the Bure, happily close to The Lion at Thurne for another spot of refreshment, and one of the most beautiful windmills in Broadland, then the River Thurne. Keep a look out for The Wherry Albion and its black sail here, the restored boat is based on Womack Water in Ludham just across the river.
The route from Potter Heigham to Stalham has some of the Ways most enjoyable walking followed by some that is less so. Potter, by the way, is well worth a stroll around. The section that briefly skirts Hickling Broad is lovely, and unless you are monomaniacal about keeping to the path take a detour to visit the broad. From Hickling you take the back-roads to Stalham, where at the right time you may enjoy the Pick Your Own farms. There are lots of small shops in the long High Street, or you could pop to the Tescos here.
From Stalham the path cuts across open country again, touching on some quiet lanes nearer to North Walsham , nowadays quiet but once a hub of the textile world, its wool church the largest such in the county. Theres a good country hotel here, and several excellent pubs , so it makes a natural stage-point for the walker.
The historic town of Aylsham is the next destination, reached via the disused railway line converted back into a public pathway in 1981. You absolutely must not miss visiting Blickling Hall , in common with about 30 other buildings supposedly haunted by Anne Boleyn . The path takes you to the estate, so take time to see what is one of the most splendid Jacobean structures in Britain, though a little further along the path beyond the village of Aldborough (the sort of village Americans imagine England is comprised of) Felbrigg Hall , another National Trust property, rivals it.
And so to Cromer, though to get there you do have to crest a hill (or Norfolks nearest equivalent), Cromer Ridge. There are some delightful Victorian and Edwardian seaside hotels in Cromer, and many other options from traditional B&Bs to country house places. Whatever you do here you should (unless vegetarian) sample the seafood, especially the local crabs for which the town is famed. And if you have just completed the 61 mile Weavers Way maybe a drink is in order too.