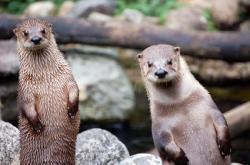 The idea of enjoying the wildlife and wilderness of Mull is far from new: Dr Johnson and Boswell made the trip in 1773. But it doesnt tire; and though the islands permanent population  below 3000  swells greatly in season, with an area of 338 square miles and 300 miles of coastline there is plenty of room  one of the keys to the richness of the wildlife to be found on Mull.

Mull too has a variety of environments providing habitats for a huge range of species: the coastline is a mixture of sandy beaches and rocky cliffs; most of the inner island is moorland, but with framing hills the tallest of which is Ben More, the only Monroe here; freshwater lochs and their seawater equivalents; rivers and glens; and even some forest. A few figures: more than 250 bird species can be spotted on Mull; their diversity helped by 4000-plus plant species; more than 1500 fungi; and nearing 250 types of seaweed.

With such a resource naturally the visitor industry locally is switched on to wildlife tourism: Island Encounter Wildlife Safaris is just one such provider; Landrover Wildlife Expeditions another. There are boat trips from Tobermory , the islands capital (with a cosmopolitan 700 residents) to spot shoreline seals and seek cetaceans. Or you can find your own way around and simply keep your eyes open.

For birders Mull is a far cry from the flatlands they often frequent. The prize species to tick off here is the white-tailed Sea Eagle, re-introduced a decade or so back, but the Corncrake runs it close. In spring the cliffs house Kittiwakes and Fulmars; and the abundant small mammals feed Golden Eagles, Peregrine Falcons, Kestrels, Buzzards (so plentiful and so often mistaken for their cousins theyre known locally as Tourist Eagles), Sparrow Hawks, and various owls, including the day-hunting Short-Eared Owl. The Merlin makes occasional appearances too.

The voles and mice that fill raptor bellies may be too small to sight, but not the lovely otters, and certainly not the feral white goats, the former hugging the sea inlets, the latter skipping up crazy slopes and even cliffs on the southern part of the island. Red deer roam wild on the moorland, smaller Fallow deer hide in the forests. Both are shy so sightings can be fleeting. There are even lizards, whose presence attests to the warming properties of the Gulf Stream.

Casual ecologists will want to grab the chance to see and maybe photograph cetaceans: harbour porpoises, bottlenose dolphins, common dolphins and Minke whales are not unusual; and some killer whales make their way to the area. So too does the magnificent basking shark.

There is more to the island than simply its fauna of course: but there is no reason why a trip to MacKinnons Cave, the deepest on the island; or the naturally baroque Carsaig Arches; or the products of mans ingenuity like 13th century Duart Castle , or the more recent Glengorm Castle should mean you dont still see the living wonders that surround or overfly them. And it would be unusual for a round on either of Mulls two golf courses not to yield a few bird species.

With relatively warm waters, and the enticement of wrecks around its coast and even in Tobermory harbour (where a Spanish Armada galleon was sunk by the locals who carelessly hadnt noticed its golden cargo) diving is popular; likewise fishing for obvious reasons. Even getting there is rather easier than in Johnsons time: the main ferry service is from Oban to Craignure ; other vehicle ferries run from Lochaline to Fishnish, and Kilchoan to Tobermory. For the more adventurous there is even a sea-plane service from Glasgow these days, all of which youd best book in advance.

A healthy tourist trade means Tobermory (Balamory for those with kids) punches above its weight for restaurants and retail provision , and many of the other settlements on Mull have eateries that make the most of its seafood and natural larder. Information Britain lists hotel and other accommodation in Tobermory, Craignure, Dervaig , Bunessan , Salen and Aros , and is the gateway to cottages and other self-catering options throughout the island. And whatever you do, unless convictions dictate otherwise, try to arrange a visit to the Tobermory Distillery for a drop of something very fine indeed, and maybe to purchase a liquid equivalent of Prousts Madeleine to spark memories when you return home.