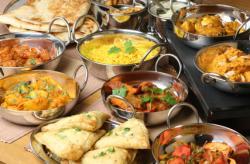 Curry and Culture in Leicester

This is the age of the staycation and the handy-break. Brits are, in some cases for the first time, exploring their own countrys glories. Cornwall à la Cameron is great for a week or more, the Highlands likewise, but for most of us they are distant, and travel eats time. Leicester, however, is within an easy half-days drive or train-trip for the majority of the population.
Why Leicester ? Because it offers a wonderful blend of English history and exotic food. Curry and culture then. Is this what is meant by successful multi-culturalism? Or spicing things up during a trip away?
Leicesters history like its cuisine is rich. The Romans settled the place, parts of the Jewry Wall built in about 130AD still to be seen, its attached museum displaying archaeological finds from that era. The settlement became a city (though it subsequently lost that status for several centuries) in the Norman period when its castle was constructed, the Great Hall and motte remaining to be visited today, its church of St Mary de Castro also in good shape.
Simon de Montfort forced Henry III to summon what can be regarded as our first Parliament, held in 1265 in Leicester, and the intriguingly named Parliament of Bats (referring to makeshift weapons not mental state) also took place here in 1426. A feel for Leicesters medieval history can be gained by visiting its Guildhall , the medieval merchants home at Wygstons House, and the Magazine Gateway ; or wandering about the Castle Park area.
While you are checking out the culture you can get an early taste of the food: theres no shortage of high quality takeaway provision, including some rather classy places  Bombay Bites in Belvoir Street a recommend. Or make for Currant Affairs , a natural whole-food store on Loseby Lane where you can purchase snacks.
More modern aspects of the city (as it became again in 1919 by the way), and maybe stuff of greater immediate interest to younger members of the family, are represented by its Museum of Technology at the Abbey Pumping Station (steam engines and suchlike), and by Britains National Space Centre  very hands on including the wonders of a huge planetarium.
Shopping offers a nice link between culture and curry here: the East Asian influence on the citys food markets and shops and its fashion stores is evident from just a stroll around the place. But theres also excellent antiquing.
Okay, weve paid our cultural dues (and had some fun), now for the curry. A few factoids first: Leicester is said to have more curry houses per head than any other large town or city in England; Leicester won the title Curry Capital of Britain in 2007 (beating 15 rival cities); just within the city itself there are more than 30 curry houses.
Indian independence and its consequent upheavals saw the arrival in Leicester of large numbers of immigrants from the sub-continent in the late 1940s and early 1950s. They found cheap housing in areas like Belgrave, still a centre of the curry business, and work in the textile and clothing factories. Ugandas expulsion of its Asian citizens in the 1970s brought many more new residents, seeing for example Melton Road, popularly known as The Golden Mile, become a centre of the Indian community.
Where to go for a curry in Leicester? Youll not be far from a restaurant wherever you stay, but the main centres are the aforementioned Melton Road; Narborough Road, a bit further out and with the added attraction of other cuisines mingling alongside the curry places; plus Belgrave Road and London Road. Oadby deserves an honourable mention too.
The original Indian arrivals were mainly Punjabi, so much of the food reflects that fact, but there are many alternatives of offer, with vegetarians especially well catered for thanks to the majority of the Indian-origin cooks being Hindu. There is also Balti; and the attractively spicy-fiery Goanese cooking at places like Anjuna and Kayal; and Southern Indian cooking can be found at Dakshin on the Belgrave Road; and Ek Maya on Dysart Way has some more unusual dishes including Ayur Vedic cooking.
Many curry restaurants here can claim to be local institutions: they include places like Bobbys on the Melton Road, around since 1976, and renowned for its sticky Indian sweets; Laguna Tandoori (intriguingly loved by The Sun); Tiffin on London Road; and The Curry House . That list is far from exhaustive. There are of course ordinary curry places in Leicester, but with our information and a few questions to your hotel staff youll find the great ones, the memorable ones; the rewards for tramping round the shops looking for saris. And as you sit there you can reflect on the richness of a culture that encompasses the birth of parliamentary democracy alongside cumin, cardamom and chapattis.