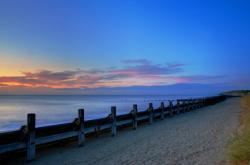 The Stranger Side of the Suffolk Coast

The Suffolk Coast is of course much visited for its splendid beaches, for the sailing from Orford or on Oulton Broad , to enjoy the music at Aldeburgh and Snape , and even for foodies the smoked sprats and Adnams Ale . But there are some less well-known sights and sites that we think merit a tour; or at the very least some that should be fitted in during a trip to the area.
If we start our journey from the southern end of the countys shore, the first oddity we come across is the proliferation of Martello Towers, those strange survivals of our 19th-century coastal defences. They abound near Felixstowe - if you take the B1083 from Woodbridge to the seashore there are no fewer than four between Bawdsey and Shingle Street.
There are, however, 47 surviving Martello Towers in England, but only five tide mills in all of Britain, an example in working order that is happily open to the public to be seen on the Deben just south of Woodbridge . Nearby is one of our greatest archaeological sites, Sutton Hoo , where you can tour the place the magnificent Saxon treasure was discovered, and at the visitor centre see a reconstruction of the burial chamber.
For a touch of the weird a visit to Thorpeness north of Aldeburgh is in order, the village once voted Englands weirdest by Bizarre Magazine. In the 1920s what had been a fishing village was turned into a fantasy resort based on what its Scottish barrister and railway designer owner thought merrie England should be like  Epcot six decades early. Strangest sight in the place is The House in the Clouds, a real residence that looks like something out of Dr Seuss  a house atop a tower, built to mask a water tower. The Peter Pan-themed boating lake is another spot worthy of note.
Just as Thorpeness beat Disney to the draw, so did Leiston predate Detroit, for this pleasant rural settlement had  and still has  what is thought to be the first purpose built assembly line factory in the world. The Long Shop is now a museum with steam engines made there on display.
There is no visitor centre at Sizewell Nuclear Power Station just down the road from Leiston, but seen from a distance it is impressive and rather beautiful in a modernist way, and the beach nearby, thanks to that station, is unspoiled and lovely.
A few miles further north along the B1125 and little back-roads brings you to Dunwich , which is interesting for what you dont see, unless you are a diver, for once this was a major port, regarded as the early medieval capital of East Anglia. In 1286 and again in 1328 and 1347 great storms swept much of the town into the sea. The ruins of some significant religious buildings still stand inland as reminders of Dunwichs heyday when it is thought to have had 18 churches. Some say that while walking the beach here you may on occasion hear the drowned bells ringing .
At Walberswick or Southwold if you prefer you can between April and October, subject to numbers etc, enjoy one of the last rowed ferries in Britain, though there is actually another in Suffolk across the River Butley not far from Orford . While you are in Southwold we would recommend a visit to the pier to see the strange coin-operated machines displayed there, and a rather less arcane trip to the Adnams Brewery in the heart of this fine resort.
Fans of The Darkness may be aware of the next stop, and a suitably strange one: the door of Holy Trinity Church in Blythburgh has marks that local legend says are the devils claw-prints. Equally fascinating for lovers of the fantastic is the story of Black Tobias here, said to haunt the common  Toby was a black dragoon hanged for killing a servant girl, though as she had no marks on her it was later suggested she died of drink. And while we are dabbling in such matters, George Orwell once saw a spook in Walberswick churchyard .
We end our journey at Lowestoft , which has a fascinating survival of older days in the scores there, paths worn down into the slope of the cliff between the shore and the High Street. A marked trail of these narrow routes now exists. And we finish at Lowestoft Ness, the most easterly point in Britain, a marker on the ground pointing to places around the world.
Far more famous places are probably higher up your Suffolk to-do lists, especially the beaches , but a touch of the unusual could spice a trip somewhat whether you are staying in Lowestoft, Southwold, Woodbridge or Felixstowe or any of the other towns and villages dotting that most scenic of coasts.