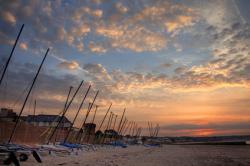 We British display a strange ambivalence towards our Gallic neighbours  we love the country, but the people...? Which is perhaps the reason why the Channel Islands are a favourite destination for us: so very French in style without that soupcon of bloody-minded rudeness. A good place for a break with touch of the French without tears.
Historically of course the Channel Islands were French, or at least from 933 Norman. In 1204 King John managed to hang on to the islands when he lost the rest of Normandy, and they have remained self-governing crown dependencies ever since, even their laws and political forums owing much to French roots.
At the closest point (on Alderney) only eight miles separate the islands from France, and the climate has more in common with Normandy than Northumberland, warmer and sunnier than we enjoy on the mainland. It is not surprising either, given their geological connection to the mainland, that the Channel Islands should resemble Normandy physically, with similar beaches and bays.
So what are the particularly French aspects of the islands that you should look out for, indeed seek out, during a break? Firstly the place names: St Helier , St Ouen, Beauport, Minquiers and numerous others. Until relatively recently the main languages on Jersey and Guernsey were the local forms of Norman-French, and some still converse in them.
The cultural ties with Normandy are celebrated annually in a festival held in turn by Jersey, Guernsey , and one of the larger Norman settlements, a gathering in June known as the Fete Nouormande. There is folk dancing, participants often wear traditional local dress, and the entertainment includes poetry, story-telling, and the singing of old songs, along with, naturally, the downing of wine and cider.
Ah! the foods. While the English language has since the early 19th century advanced relentlessly, now completely dominant on the islands, it has happily been harder to break the ties with foodstuffs enjoyed there for many centuries. Guernsey Gâche is the best-known delicacy, a richly buttery leavened fruit-bread that you simply must try during your trip  and it isnt limited to just Guernsey. Another Jersey speciality is Fliottes , a sweet dumpling poached in milk, which is first cousin to Mervelles, twisted ring doughnuts fried to a toothsome deliciousness.
Keep your eyes open too in delicatessens and other outlets for Black Butter , or in the local patois Le Nierre Beurre, which doubtless to the chagrin of EU bureaucrats in fact contains no butter at all. It is made with cider and apples, plus sugar and a few spices and flavourings, heated, stirred and reduced to a tasty dark and sticky mass that is spread on bread or eaten as a sweetmeat on its own.
The cider that is used in making Black Butter is of course also a pleasant tipple in its own right, and made into apple brandy too like the Norman Calvados.
These days the relationship with France is a good one, and a side trip to Normandy is something to consider. In the past things were a bit tougher: in 1461 the French seized the ancient castle of Mont Orgeuil , and ruled Jersey from it for seven years; and in 1781 they invaded again (to be fair to them privateers from Jersey had been plundering French shipping during the American War of Independence ), though it was a rather farcical affair that ended swiftly and dishonourably for the invaders.
Mont Orgeuil, or a later version of it, still stands and is a must-see. Elizabeth Castle built to defend St Helier is something you cant help but see if you are in the area. Castle Cornet on Guernsey performed the same function and again for visitors to those shores is a trip not to be missed. A more peaceful reminder of neighbouring Normandy is the Priory on Lihou, established by monks from Mont St Michel nine centuries ago.
Shortly after the 1781 invasion a peaceful French influx began, refugees from the Revolution. In the middle of the following century the French writer Victor Hugo lived on both Jersey and Guernsey during his exile from a France ruled by Napoleon III, during his exile writing Les Misérables. His residence on Guernsey, Hauteville House , is a museum dedicated to the author, the buildings actually owned by the City of Paris nowadays.
So food, climate, geography and more than a bit of history link the islands with France. Likewise place names and language. But along with the things we can see, hear and taste there is a somehow French feel to the place, an atmosphere of civilised relaxation and enjoyment of the good things. Lets call it a je ne sais quoi.