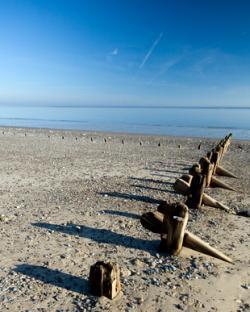 A Quiet Break in the East Riding

How often do we plan a break to, per that great cliché, get away from it all, only to find more it when we get there? For a really quiet break, with little danger of crowds and clamour, consider a spring, autumn or winter trip to the East Riding of Yorkshire: other than in high summer it takes little effort to find empty beaches; enjoy the wide open spaces of the Wolds ; and even explore the other-worldly emptiness of Spurn Head.
For those arriving from the south we heartily recommend planning your route to use the Humber Bridge . Crossing its elegant span really feels like beginning something different, which is a good start to a relaxing break. Bypass Hull as this is not the trip for the buzz of a city, and head for Beverley.
Its not for the races at Beverley  far too hectic for this trip  but for a stroll around this delightful medieval town with street-names redolent of distant days  Hengate and Ladygate among them - that we suggest starting here. You dont even need to take in the lovely Minster , but generally it is far from crowded. Nearby is the less well-known St Marys , less spectacular but another haven of peace. There is no shortage of pubs for a tranquil tankard, or pleasant places for a pot of tea.
If Beverley seems a bit too metropolitan for this trip then head to the east of Hull and the cluster of lovely rural villages that includes Ottringham, blessed with a fine old church and a choice of two pubs, and the larger Keyingham, again with a pretty church and even a shop for essential supplies. The countryside in this part of Holderness may make you think of the Netherlands, or Norfolk, so flat can it be  great of course for walkers and cyclists, and if you decide to rent a cottage in the wilds great for astronomers or simple stargazers too.
It would be a sin to visit this side of the area and not make it to the coast. Withernsea has a pebble and sand beach that outside of summer is unlikely to be thronged with visitors, though Hornsea s sandy strand a drive northwards is arguably a prettier spot, and there is the mere to walk around, nearly 500 acres of freshwater.
Still further north is Bridlington , rather more of a traditional seaside resort, though out of season worth a visit for its harbour. Bridlingtons Old Town route is fascinating, old snickelways aplenty to explore. You could risk bumping into people in the town or on the beaches here however, so if on your day there it looks like youll have to exchange greetings make instead for Flamborough Head . The dramatic cliffs are worth seeing whatever the time of year, and it is out of the way enough and with on the southern side huge expanses of sand so youll have acres to yourself. Eyes peeled for the occasional fossil among the pebbles and rocks too  though best to keep away from the base of the cliffs and definitely dont dig into them! For the inner-man by the way there is a top chippie in Flamborough itself. If catching your own fish is your thing, the beaches attract plenty of anglers  its to be hoped then there are at least equal numbers of fish around.
For a real getaway and plenty of sand Spurn Point is your destination, its geography the antithesis of towering Flamborough Head. The spit of land projecting into the Humber Estuary is three miles or more long, but as narrow as 50 yards in places. A bonus on the quietness front is that the nature reserve here allows no dogs so the innumerable birds  and you - wont be disturbed. Spurn is a strange landscape, generally windswept, the marram grass teased into whispering song by even light breezes.
Should you feel the need to visit an attraction, then Burton Constable Hall between Hull and the coast, a mile or so north of Sproatley, will provide you with some wonderful sights. This Elizabethan pile fits the quiet bill too, with 300 acres of gardens to lose yourself should a coach party arrive to spoil your isolation wandering the 30 open rooms. If you have kids to keep occupied (and quiet) the hall offers free-to-use packs for junior bug-hunters and bigger game spotters.
For larger scale hiking the wonderful Wolds here contain a network of paths and trails, the most significant of which is the Yorkshire Wolds Way National Trail  follow the full thing and youll cover 79 miles between the Humber and Filey Brigg, but there are more manageable chunks, and any number of little lanes that lead through the shallow valleys and greenery of this gently undulating landscape. The Wolds are a lovely part of the world, lots of old churches, the occasional grand house like Burton Agnes Hall , and little villages with the obligatory welcoming pub , but most of all a feeling of space. If you feel the need for society some walks take you via towns like Market Weighton , and very nice too, but many are just field, forest and the distant glimpse of a windmill or steeple.
This being Yorkshire the people tend to be chatty and friendly, but there is the prospect too of a week of generally anti-social isolation if such a break tickles your fancy. And for those of us living in larger towns and cities it may well do just that. Search these pages for a quiet country inn or hotel ; or venture at night into one of the towns for your accommodation  there are loads of options.