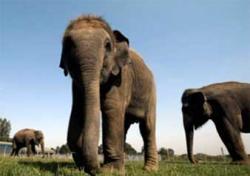 Thanks to the M1 Bedfordshire is pretty easy to get to from North and South, which makes it a useful target to set for a quick escape to the country for many of us. And yes, you can in the words of Annabella Lwin go wild in the country there  though snakes in the grass are unlikely.
Why Bedfordshire for fresh air and fauna? There are lots of country parks, and plenty of open land for hiking and wildlife watching, but two places stand above the rest  especially if you have children to amuse: Woburn Safari Park; and Whipsnade Zoo.
To deal with the country parks and woodland areas first, of interest perhaps because some are free. The best-known is probably Harrold-Odell Country Park in the countryside northwest of Bedford , covering a 144-acre site that includes wetland and two lakes (even wetter), and the banks of the River Ouse , a good place for birders serious and occasional. Heading back towards Bedford from there you will find the three-mile Stevington Country Walk that occupies former railway land. Youll spot a windmill , a weir, and if you look further you can take in views of the Ouse Valley.
You can kill two strictly metaphorical birds with one stone if you head for Whipsnade, as not only does it have the zoo discussed below, but it is also the village where you can start your ascent to the highest point of the Dunstable Downs  not exactly Everest, but a good haul, and with the Chilterns Gateway Centre at the very top. Or you can cheat and drive there via the B4541. Dunstable itself is another start-point. The views are tremendous, the feeling if you walk it one of achievement, and its free. A good place to fly a kite, set out on a walk, or even bring the bikes for a ride along the Icknield Way.
Not a huge area, but if you are in this neck of the woods as it were, Whipsnade Heath, preserved by the National Trust, is worth a quick detour for a woodland stroll. Just as the Dunstable Downs nestle near to Whipsnade, or vice versa, so does Woburn snuggle close to Aspley Woods, set between Woburn Abbey and Woburn Sands . A great place for walking in the shade of old trees.
But now we get to the meat of the thing as far as the kids will be concerned. Whipsnade and Woburn. Lets take Whipsnade first, heading to the famous zoo from junctions 9 or 11 of the M1. An offshoot of (and in effect originally a convalescent home for) London Zoo, it is celebrated for its work in conservation, with a large percentage of the animals you see born and bred in the place, and able to enjoy large open enclosures rather than cages. Highlights will be the rhinos, elephants, the big cats, monkeys and meerkats, with a special mention for the dolphins and penguins too. You can even sneak in a bit of education while you are guiding the kids around, but the main thing is the fun, not all of it necessarily linked to the animals  good play facilities to exhaust the littlies too, and a two-mile narrow-gauge railway trip to enjoy.
Up the M1 a little, reached easily via junction 13, is Woburn Safari Park , with Flitwick to its east and Milton Keynes west. Woburn has a couple of cards up its sleeve if we pit it against Whipsnade, firstly with Woburn Safari Park set near the fine 18th century Woburn Abbey , and secondly the vast expanses of land here, where you drive through the animal enclosures: eland, giraffes, monkeys, lions, rhinos... on one of our hotter days you can imagine yourself for a moment in Africa, until of course you see animals from another continent. Again the park is heavily involved in rescuing endangered species, taking part in international breeding programmes, but again it is the fun of the thing that will count with the kids. Best not to let them venture out towards the lions of course, but there is a 40-acre zoo-cum-petting-area-cum-retail-facility, and recently a Go Ape! activity centre has been added, so any excess energy can be worked off.
Mix and match a little. Base yourself somewhere in the county  Information Britain has plenty of accommodation options for you to consider in Bedfordshire  and take in one or both of the big Ws to see some exotic fauna, then visit a country park to see more of our native species and to stretch the legs and breathe a bit.