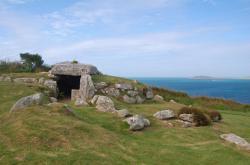 When most of us think of the Scilly Isles we may think of the peace and quiet, the fine beaches, and the birdlife for which theyre famous. Those of us of a certain age will recall Harold Wilson holidaying there. Unless you are an archaeologist or have visited before, you may not be aware of the wealth of prehistoric sites on the islands, enough to fill several days of exploration.
To give an idea of the prehistoric riches here, consider this: there are about 80 so-called entrance graves scattered over the islands, while Cornwall from which the Scillies were settled can only claim a dozen.
So rich is the prehistoric heritage on the islands indeed that some have suggested that these were the fabled Islands of the Dead of Celtic and even Greek mythology, the western lands to which kings and chieftains were brought for burial. One problem with that line of thinking, however, is that even in Roman times it is thought the islands or most of them were still one landmass, Sullia or Scillonia Insula, also known as Ennor, or perhaps two or three significant islands, the scattering into the multitude of smaller isles effected by rising seas perhaps as late at 500AD. It certainly seems like there are too many tombs and burial sites for such a small area, though.
The rising of the seas means that investigating our prehistory on the Scillies can also be of interest to divers off the Scillies, with some remains beneath the waters now. Not that the islands arent already of interest to divers for the many wrecks littering the sea beds hereabouts. Submerged huts and boundary walls can be found off the shores of Bryher, Tresco, Tean, and Samson among others.
As might be expected, the largest island of St Marys has the best selection of sites, though largest is relative of course  at a little over 6km2 St Marys in spite of its road network is still somewhere for strolling between stops. There are some inland sites, but a trip around the coast reveals most of the finest: not far from the air- and heliport near Old Town is the hill-fort called Giants Castle; making along the coast north-east brings you shortly to the impressive burial chamber at Porth Hellick Down ; continue around the coast anti-clockwise and you come to one of the major archaeological sites, Innisidgen , one of the chamber tombs restored by English Heritage.
Because the Scilly Isles are still places where you can escape from the noise that is almost unavoidable on the mainland, they provide a good environment for reflection, somewhere that with a little imagination you can transport yourself back a few millennia to mingle in the mind at least with our forebears.
Further round the coast, on the western side perhaps 40 minutes walk from Innisidgen, there are two sites in close proximity, for someone wanting to visit just one or two spots this would be ideal: the late Stone Age tomb of Bants Carn , and nearby perhaps the most fascinating site, Halangy Down Village, dated to about 200BC and with the remains of a large central house or hall clear to see, along with several smaller properties.
St Marys is also where youll find the Isles of Scilly Museum , on Church Street in Hugh Town, with plenty of finds and information on various sites.
The island of St Martins north-east of St Marys on the north coast has another settlement, thought to be Iron Age , at Burnt Hill.
The tiny island of Gugh has one of the more imposing monuments to our distant ancestors in an eight-foot tall standing stone called The Old Man of Gugh (pronounced Hugh by the way), not far from another site (but then nothing on this little rock overlooking St Marys Sound can be far) a chambered cairn called Obediahs Barrow, with its entrance aligned symbolically to the midwinter sun. A quarter of a mile south of these two lies another prominent site, another entrance grave called Clapper of Works Cairn, with many others of less distinction around it.
Bryher , another island north-west of St Marys, has plenty to boast about in this company too: Gweal Hill Cairns; and the site of an important find  it contained items evidently once the property of a significant member of the community, including a fine bronze mirror  at Bryher Cist.
Tresco has some 78 cairns huddling together on its moorland; Tean, Great Arthur, Northwethel and Menawethan all chip in with their own graves and cairns.
One of the advantages of exploring these sites for the amateur historian is the weather on the temperate islands, warm enough to support the famous subtropical gardens at Tresco Abbey , so between April and September with a good chance of sunshine to brighten your way, though you may be tempted from the culture and to the beaches if it is particularly clement.
Information Britain lists accommodation options on four of the larger islands. The Scillies are famous for their welcome, and travel on the inter-island launches is a fun way to get about from one to the next, though those used to a more hectic pace may need a day or two to adapt. Which is partly what any break is for.