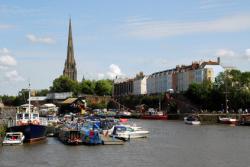 A Cultural Escape in Bristol

Many of our commentators think London is the be-all-and-end-all of cultural life in England, nay Britain, nay the entire world. Nonsense of course, with most of our major cities able to make a strong cultural case, and none stronger than Bristol. So a short break in that West Country gem makes a fine cultural escape.
And culture on so many levels. Take the theatre for a simple example. Bristol Old Vic performs in the oldest theatre in the country for a start, the Theatre Royal on King Street, and its theatre school alumni include Brian Blessed, Miranda Richardson, Daniel Day-Lewis, and Patrick Stewart, so keep an eye on the younger cast members in case you are watching another star in the making. For rather lighter stuff theres the Bristol Hippodrome, known for productions of more popular shows and musicals. Either makes a fine way to end a day of culture-vultury in the city.
Those theatre students are one part of a large student population here that brings energy and a market for the innovative, reflected in the graphic arts just as it is in the bars, cafes and music venues.
Of late Bristol has been building a growing reputation for contemporary arts, though nicely balanced still by its excellent galleries and museums of a more traditional stripe. One of the foundations of that modernist movement is the citys very own (anonymous) graffiti-artist Banksy . There are plenty of his witty works dotted about the city. Make for Frogmore Street to see the lover hanging by one arm from a window ledge while the cuckold looks out of the window, an apposite work for a sexual health clinic; the harbour where the boat Thekla has a rowboat crewed by death painted on its side; or the well-known Mild Mild West in Stokes Croft with its Molotov-cocktail-flinging bear. And being on the sides of buildings and boats they are free to view. Several artistic spaces need a mention here too: the Paintworks Event Space on Bath Road in Brislington; the still très hip after all these years Arnolfini Centre (and très free entry) on Narrow Quay in the Harbourside area, a quarter where you could easily spend a couple of days, hosts exhibitions, musical events, talks and other happenings; nearby on Cumberland Road is Spike Island , dedicated to the creation and showing of contemporary art. Or for perhaps more accessible arts, crafts and artisan endeavours head for the hugely atmospheric Christmas Steps off Colston Street in the city centre, with small galleries, potteries, quirky shops and steep surroundings that deserve to be much better known. If we are shopping as a form of art then Park Street is another spot to make for, best-known for its fashion but with lots of other independents of interest.
More traditional museums and galleries include the Bristol Museum and Art Gallery on Park Street, with a good blend of picture gallery and hands-on activities to enthral the younger members of the party, and the Royal West of England Academy of Arts on Queens Road in Clifton , though it puts on cutting edge shows too featuring the likes of Damien Hirst (is he still cutting edge?). And you should find time to visit M-Shed in the Harbourside area, with working machinery like cranes outside, and a huge variety of historic exhibits inside the 1950s dock shed.
Happily for some of us Bristol has played a great part in this countrys wine history, still reflected in the ubiquitous Christmas tipple for aged aunts (and discerning drinkers enjoying fruit cake) Harveys Bristol Cream. Even older than (now US-owned) Harveys is Averys of Bristol, formed in 1793, three years before their old rival. Right in the city centre on Culver Street is where youll find this fount of vinous wisdom. There are other intriguing independent merchants around too, notably Corks of Cotham on Cotham Hill and Clifton Cellars on The Mall in Clifton.
A part of any cultural expedition to Bristol has to be paying homage to its greatest adopted son, Isambard Kingdom Brunel. Clifton Suspension Bridge like so much of his work has majesty still today. The Great Train Shed at Bristol Temple Meads has similar ambition about it, 220 in length and with a brilliantly engineered single-span roof. But for parents and kids alike it will be SS Great Britain that will stick in the memory: you can drive to the ship, or for more fun make your way there on one of the harbour ferries that calls on this mighty vessel.
Sounds like a packed weekend to me  better make it a long weekend. As a great business centre for hundreds of years Bristol can also offer some top-end hotels, along with more modest places to suit the average pocket both inside the city and in its surrounds. Browse our Bristol accommodation pages and were sure youll find something to suit your needs and tastes.