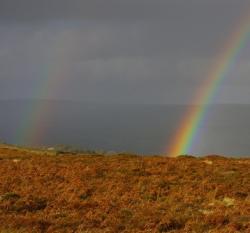 Centred on the village of Haworth just two miles from the mill town of Keighley , Bronte country is perhaps defined better by the feel of the place  its dark stone buildings and wild and windswept moorland - than by any strict geographical definition.

Another way could be to record all the locations linked with their novels and other writings, but surely the gentler Yorkshire Dales (Cowan Bridge near Ingleton is supposedly Lowood School in Jane Eyre) are not Bronte country, and nor certainly is Brussels, where Villette was inspired.

The village of Haworth was home to the Bronte family between 1820 and 1861, and it was here that Charlotte , Anne and Emily did most of their writing. Their father Patrick was rector of Haworth, having moved from Thornton just a few miles to the east, where all three sisters were born. The family are all buried in the crypt, with the exception of Anne, whose grave is in St Marys churchyard in Scarborough . Haworth is picturesque, handsome rather than pretty, with a feeling of strength about the architecture and the streets.

The parsonage at Haworth is now the Bronte Museum , with an amazing collection of Bronte possessions and other items linked to the family  most recently Charlotte Brontes going-away dress has been restored and featured as an exhibit.

Branwell Bronte, the brother whose life of alcoholism, opium addiction and squandered abilities lends another tragic layer to the family picture, drank to excess in the Black Bull in the village, and purchased opium at the apothecary there, running up debts that shackled his sisters as much as him.

The dark stone of the houses, the rough cobbles, and the very slope of the main street in Haworth all somehow mix to provide a timeless tone that inspired the darkness of the Bronte writings and resonates still for visitors.

Equally influential on that tone were the wild moors about the village, all crags and dark millstone-grit rocks that extend their brooding ambience into the literature of the three sisters. The walk from Haworth beyond Stanbury leads to the modest little Bronte Falls and the Bronte Bridge, and to the Stone Chair where legend has it they wrote their first tales, though legend also has them writing tales inspired by Branwells 12 toy soldiers and a curious mix of myths in the parsonage. A walk from Haworth or Stanbury will also take you to Top Withens, the farmstead that is believed to have been the real-life Wuthering Heights.

Perhaps the best way to breathe the Bronte atmosphere beyond Haworth is to follow the 43 mile Bronte Way, starting at Birstall and finishing near Padiham in Lancashire. The walk takes four or five days if done in one trip, or can be split into four legs. As well as Haworth, various settings in the novels are on the route: Wycoller, said to be Ferndean Manor in Jane Eyre; Oakwell Hall and Red House in Kirklees, identified as Fieldhead and Briarmains in Shirley, and various others along the way. For really dedicated walkers The Pennine Way also touches on Haworth.

Bronte Country is not, of course, just about the Brontes. Within easy distance there are many other attractions. The Keighley and Worth Valley Railway runs from Keighley to Oxenhope via Haworth, providing a more leisurely way of seeing the countryside than tramping the Bronte Way. For those keen on their railways there is another site nearby not to be missed, the Museum of Rail Travel at Ingrow, three miles north east of Haworth. In nearby Bradford there is the National Media Museum , and just a few miles east of Haworth there is the amazing village of Saltaire, a heritage centre recognized by UNESCO, offering a view of past times that gives a very different perspective to the romantic Bronte experience.