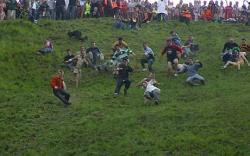 It is not only earnest types in Lycra and goatee beards who go in for extreme sports. And theyre not a recent invention either. Perhaps the most bonkers of such traditional British sporting events is the annual cheese rolling at Coopers Hill in Gloucestershire which takes place every May, where scores of courageous (or foolhardy) men and women compete generally dressed in old jeans and stout jackets or jumpers with not a Nike sponsorship in sight (though legend has it that in 1983 one contestant wore just a t-shirt and jockstrap).
For a sporting event the rules are wonderfully simple. An 8lb Double Gloucester cheese is rolled down a steep hill, and people race after it, the first one to the bottom not unnaturally winning the race and the cheese. There are no marks for style, though that is one of the topics discussed in the local pubs before and after the race.
But that fails to capture the deranged nature of the thing. The 250 yard course is down a hill where the slope is 70 degrees in places, a gentler 50 degrees in others. The surface is uneven. There are slippery bits and gravel bits. The start is so precipitous that most waiting runners favour sitting rather than the sprint position. Injuries are frequent, though surprisingly there are no records of fatalities (only ancient rumours). The injuries regularly include broken bones. It is extremely rare for contestants to stay on their feet. This is Zorbing without the giant protective ball.
What takes this event beyond ordinary extreme sports is that even the spectators can be at risk, with flying contestants crashing into them, or worse still the possibility of being hit by an 8lb cheese travelling at up to 70mph, which might smart a bit.
The cheese rolling dates back to the 18th century at the very least, and some claim it goes back to Roman times and even beyond that, as some sort of pagan healing ritual, but the logic of that one is hard to follow. A demonstration of courage, strength and manhood seems more likely, though in these enlightened times there is a hotly contested womens race included. The Roman connection has some credibility, similar (if more staid) events taking place in Italy still  Panicale in Umbria has cheese rolling at Easter, where large cheeses have to be negotiated round the town walls by entrants, the winner being the one to bowl the cheese the fewest times. Their pecorino cheese may be harder than our Double Gloucester, but our cheese rollers are harder still