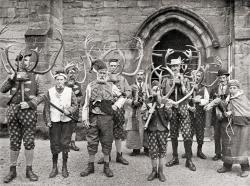 The village of Abbots Bromley in Staffordshire is home to one of the most intriguing British folk customs, the Horn Dance . The various theories concerning its origins are much debated, but like so many other British traditions it is a fun event that merits a visit at least once. As there are five pubs in the neighbourhood it is possible to enjoy some of the other traditional British ways to celebrate.
The Horn Dance takes place these days on the first Monday following the first Sunday to follow September 4, but it was not always so, at one time marking the winter solstice rather than a Wakes fair.
The Horns are six sets of reindeer antlers, believed to be of Scandinavian origin. When one was damaged in the 1970s a piece was radio-carbon dated and discovered to be about 1,000 years old. There are three white sets, and three painted brown, though the blue colour beneath shows through and the dancers themselves call them blues. Mounted on wooden deer heads with poles to make carrying easier  the lightest set is 16.25lbs, the heaviest 25.25lbs  they are held before the dancers, and clashed at key moments. The horns are not allowed to cross the Parish boundary, and are kept for 364 days of the year in the village church, St Nicholas .
The dance is conducted by 12 figures: six carry the horns, music is provided by an accordion player (in times past a fiddler, and probably a piper before that) and a boy beating time with a triangle; the troupe is completed by Maid Marion (a man in a dress, a regular feature of British culture and not just at the weekends), a boy with a bow and arrow, a dancing Fool whacking bystanders with a bladder on a stick, and a one-man hobby-horse snapping its mouth to the beat.
It is considered good luck to be visited by the dancers, so they make a pilgrimage around the farms pubs and houses that covers around 10 miles and makes 12 scheduled stops, and a few others for good measure. In times past the route is said to have been twice as long, but we all know everything was bigger then.
The tradition is one to enjoy, and the village makes a day of it. The dance is thought to have been part of St Bartholomews Day celebrations for the Abbot of Burton, dating from 1226, but as at least one set of horns has been dated to 1065 it is probable that the custom pre-dated that milestone, perhaps hijacked by the Abbot from its earlier place marking the winter solstice, or as a pre-Christian fertility ritual. The participants are drawn from one family, these days the Fowells, who took it on at the start of the 20th century from their relatives the Bentleys who had supposedly been dancing it from time immemorial. As the writer John Ravenscroft has suggested there are close similarities between the Horn Dance and figures painted 20,000 years ago in the caves of Lascaux, it is possible that in this case time immemorial goes back to the Stone Age.