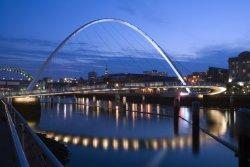 Did you know that Daniel Defoe may have begun "Robinson Crusoe" in Gateshead? He lived in Hillgate it is thought between 1706 and 1710, and Alexander Selkirk the model for his famous castaway was rescued in 1709 .

Did you know that a house in Gateshead became the first home in the world to be lit by an electric light bulb? Joseph Wilson Swan , a chemist and inventor who lived in Gateshead, demonstrated his new device in his house in that town in 1878, receiving a patent for the incandescent bulb that same year  beating Edison by a year.