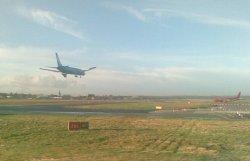 Send in your views of Gatwick | Read visitor reports

Did you know that Gatwick used to be a racecourse? It opened in 1891, and continued as such until 1940, even running the Grand National from 1916 to 1918 (the 1918 race won by Lester Piggotts grandfather by the way). Gatwick was first used for aviation in 1928 when one Avro 504 was kept there; the first scheduled flights were in 1934, serving Paris and Belfast. After much work during a near three year closure it opened as Gatwick Airport in June 1958.