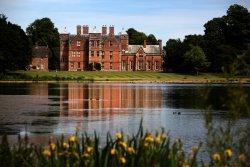 Did you know that Richmond Castle walls are the oldest castle walls in Britain outside London ? They were begun in 1071, just after William the Conqueror had devastated the region during his Harrying of the North punishing an uprising there, and were intended to prevent further rebellions. Alan the Red/Rufus/Le Roux who was given the area by his uncle William, and who built the fortress at Richmond, is thought to have been the richest man in British history, owning 250,000 acres of land, his fortune equivalent to more than £80 billion.