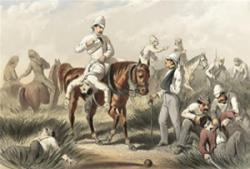 If ever there was evidence of the truth behind the maxim keep your powder dry it was the Battle of Plassey, the clash which secured the position of the British East India Company in the sub-continent and beyond for more than a century.
The Nawab of Bengal, with support from the French, was emboldened to resist the rule of the East India Company. His Gallic allies provided him with heavy artillery and soldiers trained in its use, to some extent nullifying the technical advantage hitherto enjoyed by the British. The belligerents met near a Bengali village called Palashi, anglicised to Plassey.
Colonel Robert Clive , Clive of India, commanded a force with fewer than 1000 British soldiers, and perhaps 2500 Indians. They faced about 50,000 troops in the Nawabs army. In spite of this incredible difference in numbers, Clive won a decisive victory thanks to two factors: firstly, the British East India Company had bribed certain disaffected generals in the force facing them, offering the Nawabs crown to one of them; and secondly, a rainstorm in the middle of the battle soaked the gunpowder of the French artillery and the Nawabs infantry, while Clives men managed to keep theirs dry.
Still, even with 15,000 men not joining the action, the Nawab had ten times the British strength. An ill-judged cavalry charge towards Clives guns damaged Bengali morale; British infantry swept aside the effectively musketless enemy; the Nawab fled for his life. French influence in India was all but ended; Bengal had fallen to the British; and with a share of the Nawabs treasure of about £250,000 Clive became fabulously wealthy.