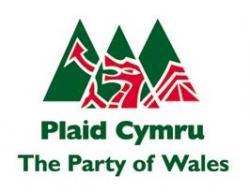 The 19th century in Europe can be characterised as the century of nationalism, seen for example in the unifications of Italy and Germany; the rise of Irish republicanism; and perhaps more quietly Welsh nationalism, the latter most visibly in the establishment of the National Eisteddfod in 1861, and The University of Wales at the end of the century.
In 1925 against a background that included the plunge into mass unemployment in the country, the lingering bitter taste of the imperial Great War, and the continued decline of the Welsh language, a meeting of those who sought to promote Welsh nationhood and culture was held on August 5 in Pwllheli, that years venue for the Eisteddfod. The figures coming together (only after agreeing beforehand that the meeting be conducted in Welsh) were far from united as regards political philosophy  Ambrose Bebb inclined to fascism, David John Williams a socialist, for example  but were determined that Welsh culture and language should not be buried by their more powerful and numerous English neighbours. Indeed they could be characterised as more literary (Williams famed for his short stories; Saunders Lewis another of their number nominated for the Nobel Prize for Literature in 1970) than political.
The party the meeting created was originally called Plaid Genedlaethol Cymru, The National Party of Wales, later changing its name to the simpler Plaid Cymru, The Party of Wales. Gaining in membership over the years Plaid got its first MP when Gwynfor Evans won a by-election in Carmarthen in 1966, is now a major force in the Welsh Assembly, and was instrumental in securing Welsh-language broadcasting.