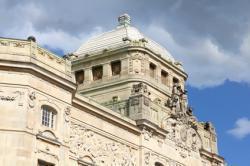 A skim over British theatrical history can leave the reader with the impression that at times fire disasters outnumbered performances: the original Theatre Royal in Drury Lane opened in 1663 and was closed by fire in 1672; its namesake in Exeter re-opened after a fire in 1885, and was closed by another that claimed 186 lives two years later; the litany continues - even impromptu venues were not immune to the problem as the horrific events in Burwell on September 8 1727 attest.
But the theatre as an institution is resilient  the show must go on after all. Thus after the 1808 inferno that destroyed its predecessor a shiny new version of the Theatre Royal Covent Garden opened on September 18 the following year. The management cannot have been too superstitious as the first night witnessed a performance of that much troubled play Macbeth with a long forgotten musical piece.
The new building would see some of the greatest names of Londons theatrical history take to its stage: Joseph Grimaldi; Edmund Kean; Sarah Siddons and Eliza ONeill; but seemingly inevitably it also saw another fire, in March 1856, after which it metamorphosed into the Royal Opera House .