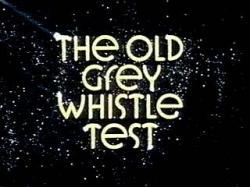 The differences with Top of the Pops couldnt have been more obvious: no dancing audience; no poorly rehearsed miming; and no appallingly unfunny funny links: Old Grey Whistle Test hit the British airwaves on BBC2 on September 21 1971, though given the line-up it was with more of a whimper than a bang. Appearances by US band America and Teesides favourite singer-songwriter Lesley Duncan didnt immediately say rock institution.
Rather than Whispering Bob Harris, forever (in some minds) associated with Whistle Test, the first show had Richard Williams of Melody Maker presenting, a thoughtful student of rock and over the years a wonderful writer on that topic and others. But elements that made the programme stand out and stick in the memory were there: the bare studio, with set-backs as the background to the acts; the Star-kicker logo; and the harmonica-based Stone Fox Chase by Area Code 615 as the theme music.
Before the programmes run ended everyone who was anyone in rock, and many who would have liked to be so, appeared on the show: Roxy Music panned by Harris; Elton John ; Led Zeppelin; John Martyn; The Faces; Yes; Al Stewart... It was a breath of fresh air, intelligent, varied and, thanks to the clever use of ancient cartoons, visually as well as aurally entertaining.