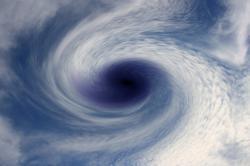 London Bridge, not for the first time, indeed fell down  or at least was badly damaged - when winds now believed to have been well over 200mph struck it during the first tornado recorded in our history. The church of St Mary-le-Bow was levelled, reports stating that four huge rafters were driven deep into the London clay so that only four feet of their 26 feet lengths remained visible. And some 600 wooden houses in The City were flattened by the winds, along with several churches of lesser renown. Incredibly, only two deaths are said to have been caused by the event.
In a superstitious age  the story of Halleys Comet being taken as a portent relating to William the Conqueror s invasion is well-known  contemporaries may have regarded the tornado, which hit London on October 17 1091, as a message from god. Given William Rufus s recent raiding of church resources it is probable there were mutterings about the wickedness of the king.
That storm may have been particularly severe, but Britain in fact suffers frequently from tornadoes, albeit generally far less powerful and memorable ones. In 2005 £40 million of damage was done in Birmingham by twisting winds of 130mph, which gives pause for thought about the destructive capability of its Norman forerunner.

From Ricky Meyer on 20th May 2013
Great story! i've written about this eventful tornado. Awesome information about the details! Only thing is the first recorded tornado was in Ireland in 1054! Other then that Kickin' good!