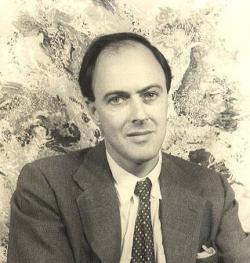 Charlie and the Chocolate Factory Published

You either love Roald Dahls works or hate them. His books for children display an often grisly black humour that some adults find distasteful, whereas most of their progeny lap it up. What this says about the child-psyche, or the adult, is for experts to comment upon.
Roald Dahl wrote his first childrens book in 1943, but focused on fiction for adults  with the small matter of his RAF service in WWII and a business career also intervening - until James and the Giant Peach in 1961. Charlie was his third book for kids, published in the USA three years before it appeared in Britain. The story is a morality tale of a poor but good boy who ends up the heir to a chocolate factory owner  Willy Wonka - as the only one of five prize-winners shown round the factory to behave well.
The gruesome treatment of the other four children  in modern terms the factory is a health and safety nightmare, albeit deliberately so  is effected with humour; and Willy Wonkas helpers the Oompa-Loompas add to that feel, though their original form as thin African pygmies working literally for beans was much criticised and later altered.
Inspiration for the story, according to the author himself, came from his schooldays at Repton , where the brutality of the regime was occasionally relieved by chocolate-makers Cadbury sending samples for taste-testing and market research: the 13-year-old Dahl imagined the inventing rooms where such creations originated.