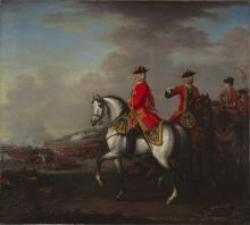 The Battle of Dettingen was significant in the War of the Austrian Succession. Trapped British, Austrian and Hanoverian forces escaped a numerically superior French army and lived to fight another day. It is also notable as the last battle in which a reigning British monarch  George II  fought; and as the clash where the phrase: Dont fire until you see the whites of their eyes (or a Scots version thereof) was first heard.
It was George II who insisted the so-called Pragmatic Army make its way to the Mainz region for political reasons, making camp at Aschaffenburg. George joined his troops on June 19 1743, shortly before the French cut supply lines to them. Worse, when George on June 27 ordered his men to begin a retreat through Dettingen the French had clandestinely occupied the village. The Main River blocked the British left, and hills its right. A large French group was making its way along the south side of the river to cross at Aschaffenburg and threaten the British rear. French artillery was put in place along the river to bombard the British left flank.
Poor discipline seemingly undid the French. Rather than defend their strong position in Dettingen and close the trap, infantry there attacked pell-mell, French cavalry charged. French artillery fire was restricted by the presence of its own troops among the enemy.
Initial French success was reversed by a counter attack, and the Pragmatic Army forced its way to a clear route of retreat, losing perhaps 2000 men compared to double that for the French.
During a French cavalry attack on his Scots Fusiliers Sir Andrew Agnew used a new tactic, funnelling the enemy through a corridor with his men either side, telling them: Dont fire until you see the whites of their eyes, as each had one shot before becoming easy targets for swordplay. George II later joked about French cavalry getting into his position; Agnew pointed out: They didna gang oot again.