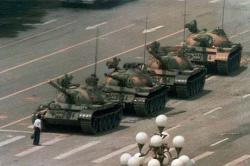 In Europe in early 1989 the signs that the communist regimes of Eastern Europe were about to fall were plain to see  with the benefit of hindsight. In the USSR Gorbachovs glasnost policy had taken effect, removing the spectre of violent reaction to change; in Poland Solidarity had won the right to participate in April elections; economic stagnation in the Communist Bloc was evident.
Similarly in China economic factors  drastic price rises  sparked resentment that found a focus when Hu Yaobang, a popular ex-leader of the Communist Party seen as reformist and tolerant of dissent, died on April 15. A small demonstration by students began, seeking to have his officially denigrated legacy re-assessed. It centred on Beijings Tiananmen Square. Soon thousands joined; other issues began to be listed: corruption; the princely partys privileges (the fabulous wealth and special treatment of those with political and commercial power  which makes you think), lack of democracy, all-encompassing curbs on free speech...
It can be a looking glass world. Workers whom the party was supposed to represent joined the original student demonstrators. It would be the workers who suffered most when the party finally lost patience in early June. At about 1:00am on June 4 1989 the army, under strict orders to clear the square, moved in with armoured personnel carriers and tanks; the square itself was cleared within a matter of hours, students, workers and journalists including the BBC s Kate Adie fleeing gunfire.
Though the event is recalled as the Tiananmen Square Massacre, all or nearly all the killings took place in the streets around it not in the public square itself. The student leadership was rapidly rounded up, with a few exceptions, and many were jailed. Workers fared worse, many of those arrested in the area, so it is reported, summarily executed. Estimates of the death toll vary enormously: at one point the Chinese state claimed more soldiers were hurt than civilians; the highest number suggested is around 10,000 dead; the lowest a few hundred. The Party remains in power.