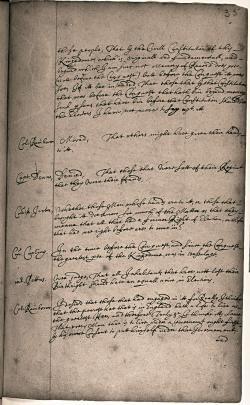 The situation with the English Civil War, often called The English Revolution, in the autumn of 1647 bears comparison with the Russian Revolution in the autumn of 1917. In both cases the monarch had been captured; the middle classes were in control; but radical elements wished to implement more drastic social and political changes. The difference is that in Russia the return of Lenin, head and shoulders above his rivals, gave the radicals the advantage; in England the power and prestige of Cromwell ensured the leaderless radicals lost out.
The Putney Debates, held firstly at the church of St Mary the Virgin in that town, were called to resolve differences within the Parliamentarian side. The grandees wished the King and Lords to retain a veto over the Commons; the radical elements, dubbed the Levellers, wanted an end to monarchy and greater rights for the common man.
Argument raged over suffrage: Colonel Rainsborough, the highest ranking Leveller, put his sides viewpoint movingly: The poorest he that is in England hath a life to live as the greatest he, arguing for equality, thus a vote for every man in the land. For Cromwell and his son-in-law Ireton (the armys chief Fairfax being too ill to attend) this was too far; they argued for landholding to remain the qualification to vote.
The Levellers broader wish-list was similar to the Chartists two centuries later: universal manhood suffrage; reformed Parliamentary constituencies; and biennial Parliaments (the Chartists wanted annual). A compromise was agreed in principle as regards voting rights, only servants and alms receivers to be excluded. But Cromwell engineered the end of the debates, and acted to suppress agitation in the army.
On November 11, just after the debates finished, Charles fled his captors, possibly fearing regicidal Levellers were bound for Hampton Court where he was confined. With his continued plotting, the Kent rising that culminated in the Battle of Maidstone, and the Scottish intervention halted at Preston in August 1648, Charles fatally lost Cromwells support.