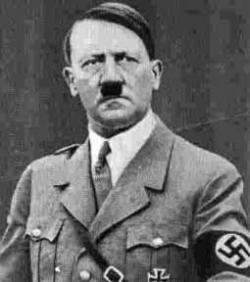 Even to the increasingly delusional Hitler, still proposing futile counter-attacks and stratagems, it was finally clear by April 22 1945 that the war was nearly over. The reality of the situation was brought home to him by the refusal of the SS General Felix Steiner to attempt a pincer movement with a cobbled together force against overwhelming Soviet forces already thrusting into Berlin. Hitler told his staff he would remain in Berlin and shoot himself rather than be captured.
On April 29 Hitler and Eva Braun married, the celebrations understandably muted. Aware by then of Mussolinis undignified end along with his mistress the previous day, Hitlers determination to commit suicide rather than face his enemies was confirmed. He had the cyanide capsules available to him tested on his pet dog to ensure their efficacy.
As the Soviets moved within a few hundred yards of his bunker on April 30 , Hitler and his new wife retired to his study. Though the precise details of how he ended his life vary, in all likelihood he shot himself at 15:30 with his Walther PPK pistol while biting down on a cyanide capsule; Eva Braun merely used cyanide. Their bodies were taken outside and burned repeatedly with petrol, but the Soviets nevertheless recovered some remains on May 2.
The war ended on May 7 ; and the trials of the Nazi war criminals began on November 20 : but Hitler, Bormann, Himmler and Goebbels all escaped justice by killing themselves  though other ends have been posited for the first two.
The remarkable last days in the bunker have given rise to many dramatic representations: Alec Guinness , Anthony Hopkins and Frank Finlay among others portraying Hitler; but however great their performances, none has ever fully captured the mixture of charisma, mania, evil and derangement of the real thing.