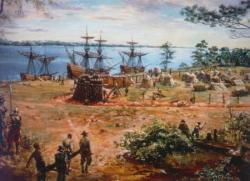 What became Jamestown was not the first English attempt at settlement in the New World; but it was the first to take root in that new soil. Previous attempts had failed, most famously with the disappearance of the Roanoke Colony in 1590. Only the name of the colony continued: Virginia, to honour Elizabeth I .
Unlike the dissidents and religious dissenters who peopled the later Mayflower expedition , those who arrived in the 1607 party included solid establishment figures, many of them proving utterly useless in a harsh new environment.
Three ships were provided by The London Company to carry settlers across the Atlantic: Discovery; Godspeed; and Susan Constant. Their voyage was difficult and protracted, lasting five exhausting months. The leaders then selected an inland island in what they dubbed The James River (after James I and James IV ) for their base, chosen for its defensible qualities and accessibility for ships; but its water was undrinkably brackish; and its swampy ground ideal for mosquitoes and unsuited to agriculture. Arriving in late spring the colonists were too late to get their first years crops in the ground; and though they at first allied themselves with local Indians they soon fell out.
Before the next arrivals brought supplies in 1608 the majority of the first wave of settlers had died. More than 50 perished within months of James Fort being founded on May 14 1607: but in spite of the terrible losses the colony held. Britain had a foothold in North America.