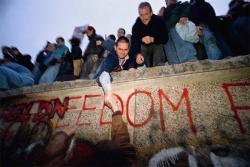 Fall of the Berlin Wall

In 1961 Communist East Germany erected a wall around West Berlin, sealing off that area of the city from its eastern counterpart and from other the areas of East Germany on which it touched. Officially the reason for the move was to defend against anti-socialist actions by fascist elements; the reality was that intellectual and professional talent in East Germany had been bleeding away via West Berlin.
For a time the wall was almost a joke, frequently circumvented by enterprising East Germans driving through checkpoints at speed, driving under barriers, floating over it in hot-air balloons, and using the sewer system to pass beneath it. But increasingly brutal means were used to stop such evasions: it is thought nearly 200 potential escapees were shot and killed near the wall over the years, thousands more were arrested and imprisoned for their daring.
By the end of the 1980s the Communist Bloc was crumbling. Gorbachov had ushered in liberal reforms in the USSR; in Poland the Solidarity trade union had highlighted the gap between the real workers and those claiming to represent them at government level; perhaps above all the old guard had lost its energy, Erich Honecker in East Germany a telling example. Honecker was sick, disconnected, loathed even by his supposed Soviet allies, but he clung to power until events moved against him in October 1989 when hundreds escaped to the West via Hungary and then Czechoslovakia with little resistance.
Demonstrations in Leipzig and elsewhere grew bolder and larger. The end was nigh and also rather comic when it came: the East German authorities hoped that passing new regulations that would allow emigration with the proper permission would turn back the tide. But the politician who on November 9 1989 made the announcement about them bungled his task, given the news too late to do any checking, on the hoof telling a press conference that the borders were to be opened with immediate effect. His performance was soon broadcast on West German television, and thus seen in the East. Huge crowds grew at the wall, the guards were unable to cope, and shortly before 11pm the gates were opened. They could not close again.
As a postscript to the story, it is interesting how many western figures have wished to claim a part in these events: Ronald Reagan with some justification, his pressure on the USSR and his famous Mr Gorbachov, tear down this wall, speech doubtless factors; but surely not David Hasselhoffs Berlin concert in December 1989 a month-and-a-half after the great events; and Nicolas Sarkozys hazy recollection about dates  he was there on the 9th, no the 16th, well the important thing was his presence - does him little credit.