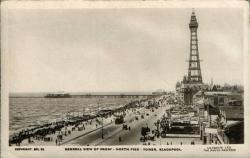 For once, unlike with the guillotine, champagne and the corkscrew, the French were ahead of us on this one. The inspiration for Blackpool Tower was a trip by the towns mayor to Paris in 1889, where he saw the Eiffel Tower during his visit to the Exposition Universelle celebrating the centenary of the French Revolution.
When Mayor John Bickerstaffe returned to Lancashire he set about organising the erection of a similar structure on the resorts shoreline. The raw figures are fascinating in themselves: some five million bricks were used, along with 2500 tons of iron and 93 tons of cast steel. It takes six tons of paint to coat the tower which stands 519 feet high. And the cost was roughly £290,000, the equivalent of £40 million in contemporary terms. The most poignant statistic is the smallest, and given the safety record of other major Victorian projects the most surprising  just one fatality occurred during the near three years it took to construct: the foundation stone was laid on September 29 1891, and the building opened to the public on Monday May 14 1894.
Our Victorian forebears were commercially astute: while the tower itself was being built an aquarium was opened at its base (replaced by the Blackpool Tower Dungeon in a massive revamp in 2011) so revenue could be generated before the main attraction was completed.
The engineers who designed Blackpool Tower (Charles Tuke and James Maxwell from Manchester) had regard to the safety of the town, hay bales at its foundations providing a cushion against earth-tremors, and the configuration of the ironwork made such that should it ever collapse the tower would fall westwards into the Irish Sea. The tower we see today, however, is not actually that built in the last decade of the 19th century, though the design was unchanged: corrosion of the original meant the iron and steel had to be replaced in the 1920s.