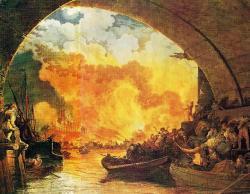 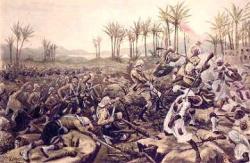 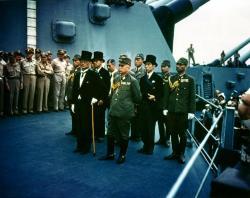 It would be hard to imagine a greater fire-risk than the City of London in the 1666. The population of 80,000 was crowded into an area limited by the old Roman walls and the Thames , where every spare inch possible was built on in an unplanned and largely unregulated warren of narrow streets. It was commonplace for buildings to be jettied, that is with upper floors overhanging the lower ones, making it even easier for flames to pass from one side of a street to the next. Corruption meant little was done about illegal building materials and methods. London had been suffering from a prolonged drought, with far less rain than usual throughout the entire year.

Though wood and thatch were in principle banned there as building materials, in practice this was ignored. Pitch too was used as a sealing and coating material. Similarly trades where fire was a part of the activity were generally banned, but smithies and glaziers abounded. Only the wealthy merchants and manufacturers could afford stone buildings.

At about midnight on September 2 1666 a fire started in the bakery of one Thomas Farriner (also spelled Farynor at times) in Pudding Lane, and spread through his house before a servant was woken by the flames. The baker and his family escaped, but one maid was too panicked to get out, and became the first victim of the fire.

Before action could be taken to combat the flames they reached stores of hay in the Star Inn on Fish Street Hill. Fanned by a strong wind the conflagration advanced to St Margarets church and thence to the warehouses on Thames Street: oil, timber, strong drink, hay and many other items ideal for feeding a fire were engulfed by the spreading inferno.

Politics local and national didnt help the situation as regards any hopes of fighting the blaze. The Lord Mayor was worried about the possible costs and what people would think were he to take the usual route to combating major fires, that is knocking down houses in its path to deny the fire fuel and a way of spreading. He failed to act decisively, and what made things worse was the City , strongly Parliamentarian during the Civil War a few years previously, was loath to accept help from King Charles II s soldiery. The citizens fire brigades had little equipment beyond buckets, and by the time Charles did take the situation in hand things had become truly desperate. He sent men in to prevent lynchings of foreigners, about whom rumours had inevitably started. And he later organised markets for the distribution of food (though not food aid, a concept not then thought of) outside the city, when those driven from their homes began to feel the pangs of hunger.

When demolitions began with the intention of creating fire-breaks, it was too late, and the over-crowded areas in any case meant that the flames simply spread via the remains of the houses which had been blown up.

The fire was to last until September 5. When it finally died down more than 13,000 houses had been destroyed, along with almost 90 churches. Thousands were ruined. The loss of life is generally thought to have been low, perhaps less than 20 people, though this may be because bodies were incinerated beyond recognition as bodies in the huge firestorm which created self-sustaining conditions such that wind was sucked into the fire, the oxygen feeding the flames, the flames rising into the sky and drawing more oxygen in at ground level from the edges. The City became in effect a giant incinerator.

Many more probably died of cold and hunger in the aftermath than perished in the flames. One poor man, a poor deluded creature, Frenchman called Robert Hubert, confessed to having started the fire, though he at first said it was begun in Westminster rather than Pudding Lane. After his trial and execution it was discovered he did not arrive in London until two days after the start of the conflagration.

Charles II showed his leadership after the fire, driving a radical redesign of the City which included the commissioning of Sir Christopher Wren to produce St Pauls Cathedral as we see it today, one of almost 50 places of worship he was to construct in the aftermath of the fire.

The fire is commemorated by a monument at the point where it started, though Pudding Lane of course perished in the flames, and the 61m tall column designed by Wren fittingly stands in Monument Street.