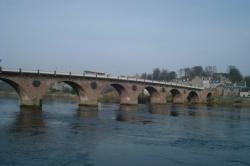 After Lincolnshire was thrown about by Britains largest earthquake in 25 years, the country has gone seismic with enthusiastic accounts of budgies falling from perches, and crockery falling off the Welsh dresser. As far away as Belfast and Aberdeen the tremors were felt. In Preston , Lancashire , residents reported the bed being gently shaken.
On February 27th, 2008, the Lincolnshire earthquake caused widespread structural damage and resonated throughout the country  at 5.3 in the Richter scale it was still a minor in a worldwide context  but consider all the excitement it caused, in an age where everyone has experienced an earthquake, albeit on television, imagine what it was like in 17th Century rural Scotland. In 1624, it was Perth that was shaking. They werent imagining it: the earth really did move, the town all shook up from an earthquake that would have put the fear of God into its inhabitants, as if it were an apocryphal portent of the End Of Days.
Of course, the world didnt end. Thankfully. Perhaps Earth is stealing itself for an asteroid, now that earthquakes are no longer a mystery, the Plague drew to a halt, and the Cuban Missile Crisis proved to be little more than nuclear bravado. Joking aside: earthquakes are actually no stranger to Britain, the country experiences 200 to 300 earthquakes each year. Though Britons can take solace in the several thousand miles that separate them from the San Andreas Fault in California, sparing the threat of seismic oblivion; the cost of structural damage caused to homes and business can run into several million pounds.
Seismology was not a career path open to the denizens of the 17th Century  perhaps a cursory grasp of the subject could have allayed the fears of worried parishioners, but any practitioner ran the risk of being burned as a heretic, or a witch. Nevertheless, the first earthquake to be properly recorded came on October 6th, 1683, when the British Geological Survey recorded their first earth-quake in Derby . There is little record of Perths earthquake, and it would not be until the 1930s when American geologist Charles F. Richter put his name to the Richter Scale that people had any reliable means of documenting an earthquakes strength.

Earthquakes occur when the earths tectonic plates shift and grind against one another. In total, the earths crust is comprised of twelve tectonic plates; floating on the dense silicate of the earths molten core, they are at the mercy of the convection current arising from the heat of earths core. This current creates instability as the molten magma of the earths mantle moves; this movement, though slow and incremental, carries with it great potential energy. When the tectonic plates grind against one another they release a seismic energy which, as the Kobe, Mexico, Pakistan, and others have found to their tragic cost, can be hugely destructive.
The world has been shaped by earthquakes. Mountain ranges are created by the migration of tec-tonic plates, and after millions of years, whole continents have shifted, cultures influenced by them. And as long as the long the earths core remains molten and the tectonic plates continue to move, grind and sculpt the planets topography; the world has some changing to do yet.