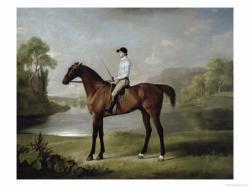 As every pub quiz fan knows, the St Leger is the oldest of the five classics in the English horseracing calendar, the first running having taken place in the year the American colonies declared their independence . Sadly it has also become the least fashionable, and perhaps the least attractive as it favours stayers rather than the more glamorous sprinters.

There are stories that the roots of the St Leger go further back still, with the soldier-aristocrat who gave the race its name having run precursors to it on the track set out in his estate in Firbeck to the south of Doncaster. But the 1776 race is the one recognised as the first St Leger, even though it was not called such until the 1778 race.

The St Leger might have been dubbed the Rockingham Stakes as Charles Watson-Wentworth, Marquess of Rockingham was the man who organised the first proper running of it. Rockingham had served as Prime Minister in 1765, and would again for three months in 1782. At a meeting in early 1778 at the Red Lion in Doncaster Rockingham turned down the honour, recalling that it had been his friend Colonel Anthony St Leger who had thought of the event, so his name should attach to it. Thus long after his governorship of St Lucia has been forgotten Colonel St Legers name lives on in this sporting context.

The first race was a sweepstake for three-year-old fillies and colts, worth 25 guineas to the winner. Run over two miles this was a test of stamina for young horses, as it still is, though these days the distance has been reduced somewhat to one mile six furlongs 132 yards.

Fittingly Rockinghams horse Allababulia won the inaugural running, with St Legers entry coming second. The 1776 event was held on Cantley Common near Doncaster, as was the next years, but after that it moved to the Town Moor course in Doncaster, where it is still held (though during World War II it had various different homes, in 1989 it was run at Ayr because of subsidence at the Doncaster course, and in 2006 renovation of the Doncaster facilities meant it was run at York .

The St Leger is still run in September, the last of the years classics, and the third leg of the triple crown (the others being the 2,000 Guineas and the Derby ), though the last horse to take that was Nijinsky in 1970. With many top horses diverted to more lucrative if less historic events rather than face the gruelling Doncaster run it may be that Nijinsky proves to be the last ever holder of the triple crown.