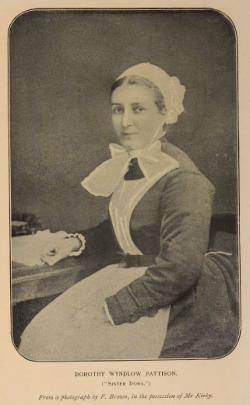 First statue to honour a woman is erected

The life story of Dorothy Windlow Pattison is a touching one, as is the way those whose lives she had improved remembered her.
The child of a churchman from Yorkshire, Dorothy Pattison who was born in 1832 had a troubled childhood and home life. She eventually fled and became first a schoolteacher, then in 1864 a Church of England nun, a member of the Sisterhood of the Good Samaritans. Sister Dora as she came to be known dedicated her life to looking after the poor and sick in the rudimentary hospitals available to them, spending many years in Walsall , then a major railway town. She tended to many railwaymen hurt in industrial accidents, and their gratitude was such that she was given a pony and trap paid for by the ordinary workers to help her in her rounds.
When smallpox hit Walsall in 1875 she continued to work with the sick, ignoring the obvious danger to her own life. It is said that she treated more than 12,000 patients in 1876, a workload that damaged her health. The following year she developed breast cancer, dying on Christmas Eve in 1878.
The people of Walsall turned out en masse for her funeral, and a more permanent memorial was agreed on by the borough, a marble statue that was unveiled on October 11 1886. This is said to be the first statue of a woman other than royalty to have been erected in Britain. Some years later, and very fittingly, a railway engine was named Sister Dora in her honour, another reminder of the work she had done with the railway workers. A bronze version of the original statue is to be seen to this day in Walsall.