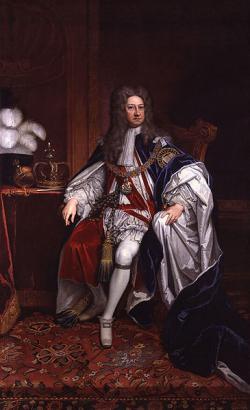 Coronation of King George I

That George Louis, ruler of Brunswick-Luneburg and Elector of Hanover, should ever have become King of Great Britain and Ireland was down to one factor  religion.

Queen Anne had seventeen children, but on her death in 1714 had outlived the last of them by 13 years. When that last child, the Duke of Gloucester , died in 1701, Parliament made provision to exclude all Catholics from the succession, leaving Georges mother, Sophia, Annes heir. Sophia was the fifth daughter of James I s daughter Elizabeth of Bohemia, but the only one who was acceptable to the British as she was the sole Protestant among them.

When Sophia died weeks before Anne as the latter was already evidently nearing her own end, the 54-year-old George was the new heir. Anne died, paralysed and unable to speak because of a stroke, on August 1 1714.

The news was rushed to the new king, but with stolid German regard for form and preparation he did not rush to his new kingdom. Once underway his progress through Germany and the Netherlands to The Hague was ponderous, with civic receptions, toasts and speeches at almost every settlement his party travelled through. George and his party finally landed in Greenwich on September 29, having been held up further by the winds blowing against them.

George was a soldier by training, and far from the brightest of British kings, a damning enough assertion. But he had a simple grasp of diplomacy and politics, and the path he chose once in power was effective. He left the ruling of his new lands in the hands of the Whigs who had wanted him as their monarch, side-lining the Tories, many of whom still craved a Stuart return. Because of his choice Britain saw the development of cabinet government and the eventual creation of the post of Prime Minister. And George had enough personal charisma to command some respect, in spite of his bulging eyes and short stature  his incarceration of his straying wife for more than 30 years gave him a certain aura in his new country.

The Coronation had been organised while George was still underway from Hanover, the Lord Justices in Council meeting on September 10 to decide the legalities, formalities and ceremonial. This cannot have been difficult, as the aim was to match previous coronations as closely as possible, emphasising continuity and a smooth transition of power, the Jacobite threat always looming in the background.

A new crown was prepared, however, the old one made for Charles II being in a parlous state  it would not do to have the crown disintegrate and provide the exiled Stuarts with a propaganda victory at the outset. Carpenters, embroiderers and upholsterers were set to making a new throne, it being traditional then for the throne from each coronation to be disposed of after use.

The great day, October 20, began in Westminster Abbey with the ceremony of recognition, the new King facing the altar; then came Communion and a sermon, and at last the vital moment when George was crowned in Edward I s throne after being anointed. Only now was he seen by all of those in Westminster Abbey, facing them with his crown in place, seated in the magnificently carved and decorated new throne to receive the homage of the Lords Spiritual and Temporal, and lastly to be acclaimed by the remainder of the congregation. This was theatre, with a clever use of props  even the crown was largely decorated with coloured glass of no value. A costume change  into the imperial purple plus orb and sceptre  followed off stage in St Edwards Chapel, and the shy new King could escape the Abbey stage.

George never bothered to learn English, using French with those of his new courtiers who could speak it, though he avoided mixing with them as far as was possible. He imported two mistresses from Germany  the future Duchess of Kendal , nearly sixty and as thin as a stick, and the future Countess of Darlington built like a prize cow. With two Turkish servants to attend to him and a coterie of loyal Hanoverians in train, George was able to bear life in his new territory, but he spent more time in Germany than in England, and fittingly died in Hanover in 1727.