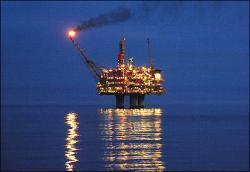 The Occidental Petroleum production platform Piper Alpha was a mighty structure standing in almost 500 feet of water about 120 miles northeast of Aberdeen. Originally solely an oil production rig, in 1980 equipment was installed to enable it to process gas as well. Having to handle the two products would eventually be a major factor in the disaster that occurred on the night of July 6 1988.
As so often with the greatest industrial disasters it seems a series of avoidable events leads to the conflagration that claims so many lives, though the destruction of the platform and the tragic loss of life mean precise confirmation is not possible.
On July 6 a pump on gas handling equipment is being maintained, and when work cannot be completed by shift-end instructions not to operate it go astray. Another order to undertake work on the same equipment is to hand, however, leading personnel to believe that it is ok to use it as the work has not commenced.
By ill-fate the alternative route for gas fails, and when the order not to use the first pump is not located, the stream is diverted through it, soon forcing a metal disk used as a temporary seal. Gas alarms activate, but too late to stop the terrible train of events as the escaping gas ignites.
An explosion tears through firewalls designed to resist burning oil rather than exploding gas. This explosion causes damage to the control room and to other pipes, and fire takes hold, preventing men from reaching the lifeboats. The fire continues to be fed by gas from other platforms that route their production through the Piper Alpha. These other rigs continue to pump for a time. Senior personnel are killed in the initial explosion, with the result that no order to abandon the platform is given.
A huge fireball eventually rips through the Piper Alpha, fuelled by gas from another rig. The fire and rescue platform Tharos cannot take men off as its rescue walkway moves too slowly. The Tharos is withdrawn as steelwork on it begins to melt.
The automatic fire-fighting equipment on the Piper Alpha is equally ineffective. That powered by electricity is lost when its power goes in the explosions. The diesel equipment is useless - the seawater inlets that should feed it are turned off because divers have been working in the waters nearby, and it was feared they could be sucked into them. The equipment to re-activate the inlets is inaccessible, though two men try to reach it, dying in the attempt.
Of the 229 men on board Piper Alpha that night, 167 die, most killed by toxic fumes. Some survivors suffer terrible burns from the fires on board and the flaming oil coating the sea into which they have to jump. The drop to the icy water is 30m, life threatening in itself. Flames hundreds of feet high mark the site. Ships and platforms scores of miles distant report seeing the inferno in the night sky.
The enquiry into the disaster headed by Lord Cullen criticized safety training on the platform and attitudes to paperwork. Tragically it appears that the lack of one document was enough to trigger the worst offshore disaster in the industrys history.