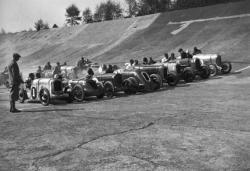 In so many ways Brooklands was a reflection of its times: it was a private venture, built on his estate by a wealthy landowner, Hugh Locke-King; it was a grand gesture, largely built it seems because of friendly pressure by Locke-Kings social circle; and it was another British first  the first purpose built car racing track - in the era of confidence and daring that preceded WWI .
Originally a somewhat simpler project had been intended, but eventually the banked track, built in concrete, cost the owners £150,000, roughly £10 million now. The banking allowed high speed driving on the 2.75 mile circuit, though the concrete (tarmac surfacing would have cost too much) gave a bumpy ride and was prone to wear tyres out rapidly.
Work on the track, designed by Royal Engineers expert Colonel Holden, only began in late 1906, but the gangs of labourers, teams of horses, and even a steam engine for the heavy work, ensured it was completed within nine months  something else hard to envisage for such an undertaking today  the safety checks would probably take longer. The official opening was actually on June 17 1907, but the work had not really been completed by then, and only a procession was possible (led by Ethel Locke-King, wife of the circuits owner). The first true race was held almost three weeks later, on July 6 1907.
Brooklands would go on to many other firsts: the first time a car covered 100 miles in an hour (1913); the first British Grand Prix (1926); and the first place where an English built plane was flown by an English pilot  Edwin A V Roe in 1907.