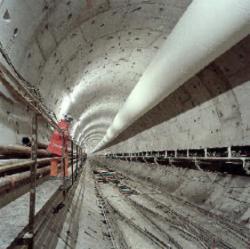 History on 6th May

The Channel Tunnel, Le Tunnel sous la Manche, or the Chunnel, was formally opened by Queen Elizabeth and President Francois Mittérand, accompanied by Prime Ministers Major and Balladur, on May 6th 1994 in ceremonies at both ends of the structure. They travelled between the two events on Le Shuttle, in the royal Rolls Royce .

A tunnel beneath the Dover Channel was far from a new idea. Napoleon even started a project for military purposes almost two centuries before todays magnificent engineering feat was started, and throughout the 19th century and into the 20th it had been suggested many times.

The actual breakthrough moment had in fact come a long time previously, on October 30th 1990, when a pilot hole penetrated the remaining wall of rock between the shafts dug from either side of the channel. On December 1st that year the opening was made wide enough first for two workers to reach through and shake hands, then for people to climb through. For the first time in over 8,000 years it was possible to walk on solid earth from England to France. The continent could no longer be isolated by fog!

For all its engineering brilliance (the two shafts were a mere two inches apart vertically when they met, just over a foot horizontally) the Tunnel has had a rough ride economically, struggling to service its debt after massive cost overruns in its eight year construction. Other problems though have been far less than predicted, with rabies precautions reduced over the years, minimal security and immigration difficulties, and the one serious incident with a train fire coped with well. The predicted demise of the cross-channel ferries has been proved very wrong, too.