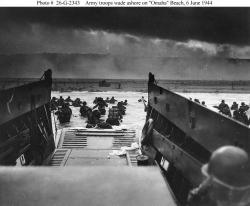 The greatest seaborne invasion in history took place on June 6 1944. The landings that day saw over 130,000 Allied soldiers reach French soil. The landings involved more than 4,000 landing craft within a total fleet of almost 7,000 vessels crewed by nearly 200,000 naval personnel. General Eisenhower was in overall command of the operation, with Field-Marshal Montgomery heading the land forces, Admiral Bertram Ramsay the naval craft. In support of the invasion some 10,000 tons of bombs were dropped on German forces during 14,000 attack missions. The numbers begin to tell the story of the incredible size, organisational difficulty, and sheer logistical complexity of the landings.
By establishing a beachhead in spite of the fortifications of the so-called Atlantic Wall facing them, and in many places meeting incredibly fierce resistance from German land forces, the Allies were able to begin the process of establishing a lodgement in Normandy as a precursor to the liberation of Western Europe.
Preparations for the invasion had taken place for months, with secrecy maintained until the last few days, when German intelligence did correctly interpret some coded communications to the French Resistance. Their warnings were not heeded, however, as they had given another similar prediction in May  again correctly, as the Allies were about to invade then, but the day was put off because of poor weather in the Channel.
Support for the invasion came from the resistance, who sabotaged transport, communications and logistics over a huge area, occupying German forces into the bargain. After midnight on June 6 paratroopers and glider forces went in, their aim being to secure territory inland from the invasion beaches, preventing German reinforcement of their shore defences. At 6.30am landing craft began to disgorge their passengers.
With the inevitable fog of war much went contrary to plan. Strong currents shifted boats out of position; the Germans had replaced one areas garrison of ineffective troops with another crack unit; many of the airborne troops were unable to regroup, and ad hoc units formed as men met in the streets and countryside.
On the beaches casualties were heavy at Omaha in particular, and officers and men in the first waves were sitting ducks for machine gunners in some sectors  the air and sea bombardment, as so often before advances, did not have the desired effect on the German defenders. But the attack continued until the momentum was irresistible. President Roosevelt stressed to his people and the Allies in general that this was not the end of the war . But it was to be the beginning of the end.