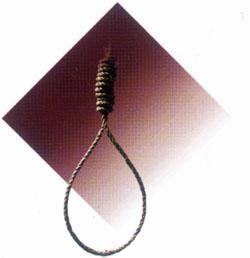 Since the 1950s the number of executions carried out had fallen considerably, and by the early 1960s they were down to about four a year. The end of the death penalty was in sight, more liberal times and perhaps the slaughter of WWII persuading Britons that the time had come to end capital punishment.
The last two men executed in this country were to die simultaneously, one in Liverpool , the other in Manchester . Their crime was the brutal murder in Workington of John Alan West, a van driver in his fifties who had worked with one of his killers, Gwynne Owen Evans. Evans and Peter Anthony Allen, with whom he lodged in Preston , drove to West's flat in order to borrow money from him, according to their testimony. Allen beat and stabbed West, and the two men stole a watch inscribed with West's name before fleeing the scene.
Allen and Evans were incompetent thieves, both with criminal records, both of low intellect. They left a medallion and a coat containing a note that quickly led the police to the criminals, who were in custody within 48 hours.
The crime took place on April 7 1964, they were tried in June the same year, both being found guilty of murdering West in the course of robbery, a capital crime. Judge Ashworth condemned both men to be hanged.
The arrests, trial, and execution took place with what to modern readers seems like incredible rapidity. Both men had been observed constantly in their condemned cells in order to avoid them committing suicide.
Thus at 8am on August 13 1964 Evans was hanged in Strangeways Prison by Harry Allen, and at the same moment his accomplice Peter Anthony Allen was executed by Robert Leslie Stewart in Walton Prison, Liverpool, their grubby crime the last in this country to be punished by the rope. They were rushed from their cells to the scaffold, a hood thrust over their heads along with the hemp rope, the so-called long drop only lasting a fraction of a second before the noose performed its neck-breaking work.
Evans and Allen were not the last in this country to be sentenced to death, but those after them were reprieved.