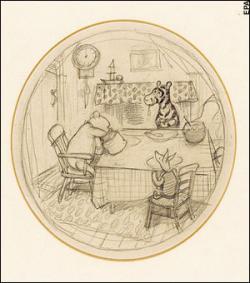 A.A. Milne had briefly introduced Winnie the Pooh to the world in a seasonal story published in The Evening News on Christmas Eve 1925, but it was not until the autumn of the following year that the eponymously titled first full book of the bears adventures appeared, published in the UK by Methuen.
There is something slightly surreal about the bears outlook on life  and that of the clinically depressed Eeyore - that appeals to parents, and the writing has a definite grace too; for children the adventures of the bear and his companions seem to fulfil the wish that they could communicate with their toys, and have the experiences Christopher Robin enjoyed. Add to the writing the delightful illustrations by E.H. Shepard at the height of his powers and an undoubted classic results.
The author based the bears world on the area around his home in Ashdown Forest in Sussex, a pilgrimage to this day for fans of the works, and something that roots them very much in the middle class England between the wars. Disney of course has made an industry out of them, though they were not the first, Stephen Slesinger in the USA bought the merchandising rights for just $1000 in 1930, though A.A. Milne did not do badly out of the deal, as he also negotiated 66 per cent of the revenue, making him a very rich man indeed within just a couple of years.
But talk of finances and money is out of place discussing the bear of little brain. Better to think of pooh-sticks and honey, of childhood and the amazing adventures to be had in the minds of the very young, and the pleasure of seeing such adventures  and maybe reliving them  for those of us slightly past our first youth.

From Paul Smith LLB on 17th January 2011
To Those who love Hartfield's Honey about a real "Honey" Smith of Hartfield. I do recall staying with Auntie Elsie (Emma) Smith born in the eighties and who died over 100 years later in the 1980's !! She was mentally agile to the end. I am 52 (years young) now living near Salisbury Wiltshire BUT I was only 9 then when I heard of AA Milne and she ("Auntie Elsie") let me do exactly what I wanted !! - Of course any lad just loved that ! Bedtime 12pm and much chocolate ... yes please !! We went to the river near Hartfield near Pooh Bridge and rolled Tonmatoes into the river. She knew everyonme in Hartfield since as a single (she never married) lady she as Districv Nurse for Hartfield delivered MOST of them then !! ANY MEMORIES OF MISS E.E. SMITH (MY GRANDFATHER TOM AS I TOLD MY ELDEST SON TOM BOUGHT HER CORNER BUNGALOW IN HAERTFIELD VERY NEAR THE LOVELY OLD CHURCH - AS A SOLICITOR I SOLD IT !! - FROM ANY RESIDENTS OF HARTFIELD PLEASE EMAil PAUL SMITH (THANKS) Thanks to a truly Great Lady - altruistically engaged helping with First World War effort as I recollect. Great friends with the local Hartfiel Killick family - do help revive wholesome Hartfield memories where anyone can !! Sincerely Paul (a great great nephew)