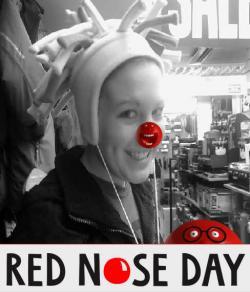 The best ideas always seem obvious after they have been suggested, but it takes a leap of the imagination to come up with them. So it was with Comic Relief, founded in 1985, and with its core happening, Red Nose Day, the first of which took place in 1988.
Legend has it that the idea for the iconic red nose product was generated by one Peter Crossing, grounded in his work with Saatchi and Saatchi. It was demonstrated to the team discussing the way forward by Jane Tewson, co-founder of Comic Relief, using a red felt-tip to paint Crossings nose.
In the first year sales of red noses  very hard, very uncomfortable and very shiny that time  amounted to 3.4 million, and more than two decades later the total has risen to more than 50 million. The red nose was such an instant hit that it became hard to get hold of one, outlets like Oxfam selling out as soon as they went on display.
Almost £16 million was raised that year by the telethon and sponsored events linked to it, an incredible boost to charities both in the UK and Africa. The telethon, hosted by Griff Rhys Jones , Lenny Henry and Jonathan Ross , was memorable for Cliff Richard singing with The Young Ones, and a Blackadder special  The Cavalier Years.
The charity has always focussed on providing help that will be of longer term benefit, and of explaining to the public where the money goes and how it is used, another aspect that surely helps continue to extract money from our wallets. The juxtaposition of comic tomfoolery with case studies of deprivation makes the charitable case ever clearer.
But it was our love of silliness that was the target so cleverly hit in 1988, as it continues to be now, whether it be stars making fools of themselves performing tasks for which they are patently unsuited, or some bloke down the pub sitting in a bath of baked beans for an evening, sponsored by his mates.
Red Nose Day has become a national institution . Hats off to it and pass them round to raise some more money.

From Sanny Love on 2nd November 2009
I think that you have not given the publicity enough information. I am doing a project about comic relief for college. I thought younwould give me good information. I come from America so thats why i do not know alot. Thank you for listing to my opion. I hope every one agrees with me. If not i am ok with that. Everyone has a opions,so do i. :)