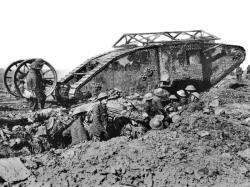 First Ever Use of Tanks in Battle

The Battle of the Somme had already been underway for two months, Haigs big push having degenerated into another battle of attrition, minor gains, and stalemate. Haig was, however, presented with what could have been the key to a major change in the balance of the war  the tank. He squandered that chance.
The tank had been kept secret from the enemy  the very name tank came from a description intended to put German intelligence off the scent. Developed by the navy, with Churchill as head of the Admiralty one of its great advocates, the first machines were manned by sailors.
Haig deployed the first Mark 1 tanks available to him  just 49 of them  in the attempted breakthrough at Flers-Courcelette, rather than waiting to use greater numbers of the machines in a massive attack. Those 49 machines may not have been fully ready either, several failing to make it into battle. The first ever tank to advance against the enemy was that commanded by Captain H.W. Mortimore in Delville Wood, the same sector where the first tank crew member won a decoration  Private A. Smith winning the Military Medal for his bravery in action there.
Some 2km of German territory was taken in the initial attack of the tanks supported by infantry, German troops reeling at the sight of the monstrous machines, but poor planning and liaison and a failure to follow through after breaking the enemy lines wasted the game-breaking opportunity.